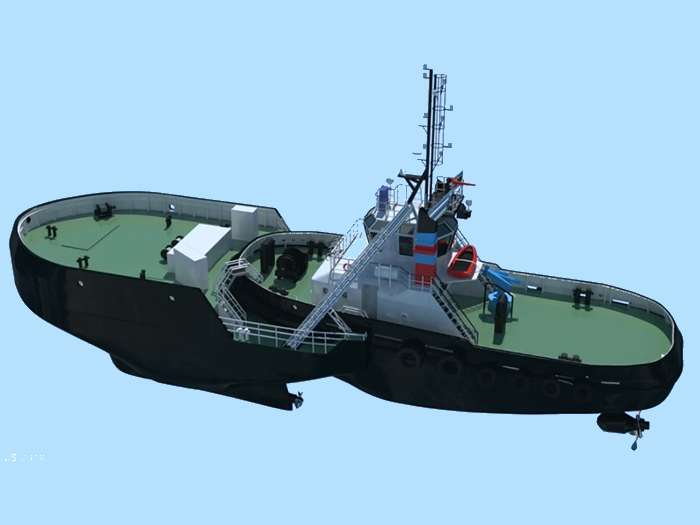 A new Finnish initiative would enable any ice strengthened vessel to be used for icebreaking, using a motorized removable bow powered by Danfoss Editron.

The Finnish Transport Infrastructure Agency has launched a project that will see the Alfons Håkans AS tugboat Calypso equipped with the bow and operating in the Lake Saimaa area from winter 2020.

The removable bow is to be delivered by Turku Repair Yard Ltd, which contracted ILS Ship Design and Engineering to carry out the classification design of the bow.

Danfoss Editron’s hybrid electric system will powering the removable bow with two generators, built as a DC system, and two propulsion systems. In addition, the company has provided a front supercapacitor so that peak powers can be efficiently controlled. The Editron software also cuts fuel consumption and delivers high efficiencies as the diesel-generators in the DC system can be driven at variable speeds. The power plan and propulsion system of the removable bow has been designed to be operated from the pusher tug wheelhouse, and the machinery can operate unmanned.

Jukka Väisänen, Project Operator at Väylä, commented: “Lake Saimaa’s ice is more solid than sea ice and can reach up to 80 cm thick. Developing this innovative design concept for the removable bow and equipping it with its own propulsion system means that we will achieve savings in capital costs, as we will charter the pusher for only part of the year. We are also expecting to see savings in fuel consumption thanks to the hybrid propulsion system.”

Kari Savolainen, Project Manager at Danfoss Editron, added: “Our headquarters are in Lappeenranta, so we can see first-hand how harsh winter conditions directly impact shipping transport. This new kind of removable bow will make the whole industry more efficient and sustainable, as it enables virtually any kind of tug to become an ice-breaker ship. Our Editron system is easily adaptable for future optimizations and can be converted to a fully-electric system if needed.”