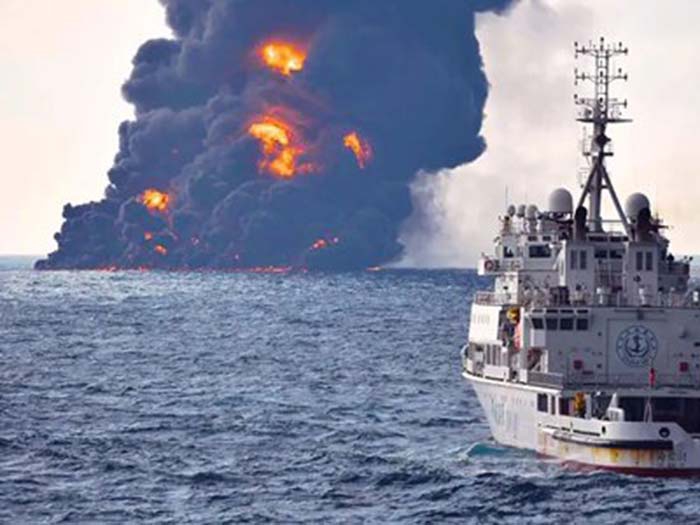 The 2008-built, 164,154 dwt Panamanian registered Sanchi, was in collision with the Hong Kong registered CF Crystal on January 6 and had been burning ever since. According to one report, “the vessel finally went down … after a new and massive fire erupted, sending a cloud of black smoke as high as one kilometer (3,280 feet) above the East China Sea.

The ship had been carrying a cargo of 136,000 tonnes of gas concentrate. Although this is an ultra light crude, Chinese authorities have sent vessels to the scene to contain a spill reported by Chinese broadcaster CCTV as 11.5 miles long and up to 4.6 miles wide and located east of the submerged ship.

“This (clean-up) work is one of our focuses,” said Chinese Foreign Ministry spokesman Lu Kang. “It is also a priority area of our efforts. No one wants to see a large-scale secondary disaster.”

He added that the cause of the accident was under investigation.

A Chinese salvage and rescue team that was briefly aboard the Sanchi recovered the vessel’s voyage data recorder (black box) and retrieved two bodies.

Iranian Foreign Minister Mohammad Javad Zarif said his ministry will use all possible means to probe into the cause of the incident through legal channels. Foreign Ministry spokesman Bahram Qassemi added stated that the black box contained all needed information, and said, “Our technical teams are present there and they will certainly pursue the issue.”

Iranian Labor Minister Ali Rabi’ei who had gone to China to follow up on the incident wrote a letter to Iranian President Rouhani, explaining that all the ship’s crew of 30 Iranians and two Bangladeshis had been killed in the early hours after the incident, some by the blast in the ship and some others due to the large fire and thick smoke that covered the vessel.