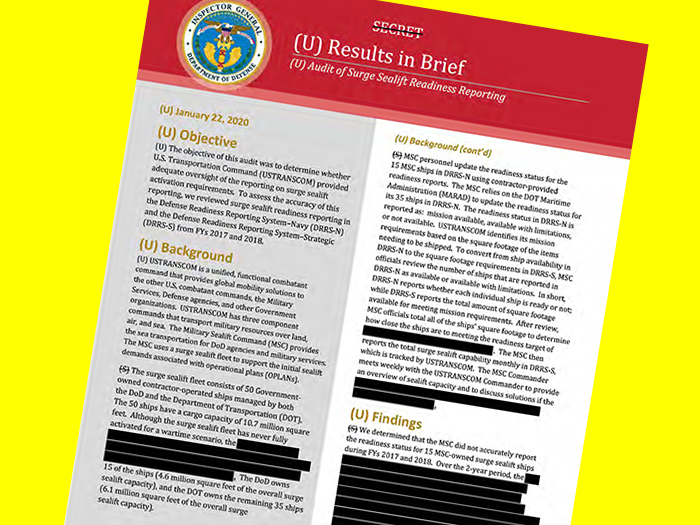 The Department of Defense Inspector General (DOD IG) has released a redacted version of its audit of whether U.S. Transportation Command (USTRANSCOM) provided adequate oversight of the reporting on surge sealift activation requirements by Miltary Sealift Command and MARAD surge sealift readiness reporting.

The IG audit determined that the MSC did not accurately report the readiness status for the15 MSC-owned surge sealift ships during FYs 2017 and 2018.

“Over the 2-year period,” says the audit, “the [and the rest of the page is redacted]

“We determined that the MSC inaccurately reported the readiness status of its surge sealift ships because the MSC relied on ship contractors to accurately report ship readiness,” continues the unredacted portion of the audit. “MSC officials stated they believed that the ship’s captains were in the best position to assess the ability of the ship to meet mission requirements, and therefore the MSC did not have procedures to verify that ship inspection reports matched casualty reports or to reconcile ship casualty reports to the DRRS-N ship readiness status.

“Consequently, as a result of the MSC’s inaccurate ship readiness reporting, USTRANSCOM’s assessment of surge sealift capability was unreliable and could lead geographic combatant commanders to make incorrect assumptions about the initial availability of equipment and resupply of critical items.”

The audit notes that the inability of a single ship to perform its mission could result in an armored brigade combat team’s equipment not being delivered when expected.

Additionally, the audit found that “MARAD contractors did not follow the MSC criteria for assessing and reporting the readiness status for the MARAD-owned surge sealift ships.”

“The difference in ship assessment and reporting occurred because the MSC did not establish standard reporting procedures with MARAD. In addition, the MSC has accepted the MARAD readiness reporting in … without performing oversight to verify the readiness statuses being reported.