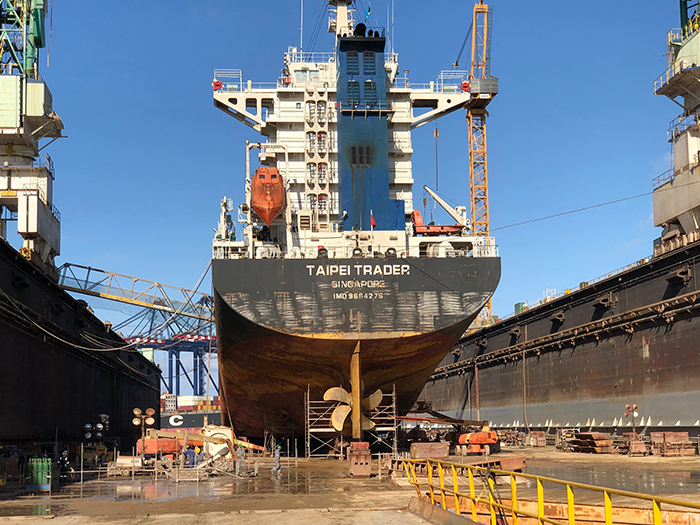 Taipei Trader, a containership operated by Lomar Shipping, docks at the No. 3 dock at Grand Bahama Shipyard – the first ship to drydock at the shipyard since reopening after Hurricane Dorian

Grand Bahama Shipyard reports that it has drydocked its first vessel since reopening shortly after Hurricane Dorian struck the Bahamas earlier this month.

Taipei Trader, a 9,932-ton containership operated by Lomar Shipping Limited, docked at the yard’s No. 3 dry dock this week, a major step in the return of normal operations to the shipyard.

Taipei Trader first docked at the yard on August 25 for a routine program including propulsion and thruster maintenance, and preparation of the hull for protective coating application. On August 30, in accordance with the shipyard’s hurricane procedures, the vessel had to be undocked and depart the shipyard due to the projected path of Hurricane Dorian.

Following the return and docking of Taipei Trader, Grand Bahama Shipyard resumed maintenance work and repairs on the ship, which are expected to be completed in October.

Earlier this month, the shipyard also announced the return of the 57,062-ton Agathonissos owned by Greece-based Eletson, which is currently at the pier completing repair work started prior to the storm  (see earlier story).

Planning remains on track for the next planned cruise ship drydocking at the shipyard, Carnival Cruise Line’s Carnival Ecstasy, on October 5.

“We are grateful to our dedicated team members at Grand Bahama Shipyard, whose hard work has made it possible for us to quickly resume dry dock operations and continue to serve our important maritime clients,” said David Skentelbery, CEO of Grand Bahama Shipyard. “This drydocking is another important recovery milestone for the shipyard and the community, which will continue to see positive economic activity from the shipyard’s ongoing operations and resultant benefit to the island.”

Added Skentelbery: “While cleanup and repair operations were ongoing at the shipyard in preparation for restarting ship repair and drydocking activities, our employees continued to volunteer their time, resources and expert skills to assist in recovery efforts across Grand Bahama. We could not be more proud of their efforts to step up when needed to restart the shipyard and to support our colleagues and neighbors.”

The shipyard’s employees have assisted Grand Bahama Utility Company Ltd. in restoring fresh water services, assisted in the distribution of essential aid by the Bahamas National Emergency Management Agency (NEMA), provided mobile light and power generation equipment to East Grand Bahama and created “flying squads” of shipyard volunteers to assist where needed on the island, including a 40-person team sent to clean up and clear debris from seven impacted schools to help ensure the buildings and classrooms are clean and safe for the return of students.

Founded in 2000 by shareholders Carnival Corporation, Royal Caribbean Cruises, Ltd, and Grand Bahama Port Authority, Grand Bahama Shipyard is a leader in dry-docking, afloat repairs, refurbishments refits and revitalizations for vessels from the cruise, commercial and offshore segments of the maritime industry.

Taipei Trader, a containership operated by Lomar Shipping, docks at the No. 3 dock at Grand Bahama Shipyard – the first ship to drydock at the shipyard since reopening after Hurricane Dorian