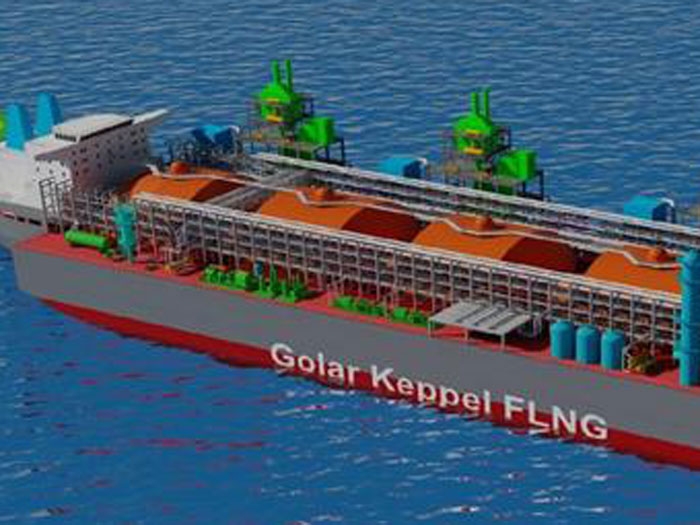 DECEMBER 31, 2014 — Golar LNG Limited says that it has executed and made effective agreements for conversion of a second Moss Liquefied Natural Gas (LNG) carrier, the 125,000 cu.m LNG carrier Golar Gimi to a floating liquefaction facility (FLNGV). The primary contract for this second Golar FLNGV was entered into with Singapore’s Keppel Shipyard Limited.

Keppel has simultaneously entered into a sub-contract with global engineering, procurement and construction company Black & Veatch which will provide its licensed PRICO technology, perform detailed engineering and process design, specify and procure topside equipment, and provide commissioning support for the FLNGV topsides and liquefaction process.

This second suite of agreements closely mirrors those for the conversion of the Golar Hilli executed earlier this year.

Coincident with the execution of these agreements, long-lead orders for primary equipment (i.e. gas turbines and cold boxes) will be immediately released.

Golar LNG anticipates that the conversion vessel Gimi will be delivered to Keppel shipyard in Singapore as early as second quarter 2015, after which the conversion project will start with renewal of key systems onboard the vessel while the topsides are manufactured.

Golar LNG expects the FLNGV conversion to be completed and delivered in approximately 33 months.  Golar LNG says that has secured certain beneficial cancellation provisions, which if exercised prior to November 2015, will allow the termination of the contracts and the recovery of previous milestone payments, less a set cancellation fee.

Keppel Shipyard says the contract is worth approximately US$705 million to the yard and that it marks the exercise of the first of two options that were part of the earlier contract for the conversion of the Moss LNG carrier, the Hilli into an FLNGV.

The work scope for Keppel Shipyard in converting the Gimi is similar to that for the Hilli.