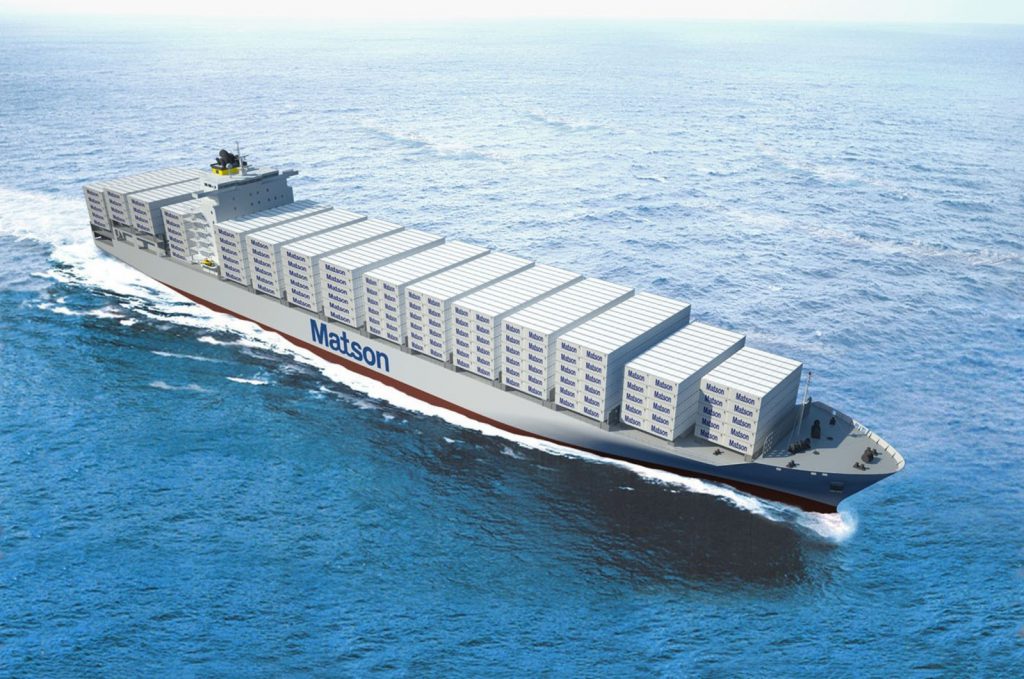 AUGUST 23, 2017 — Matson, Inc. (NYSE: MATX) reports that a subsidiary of Matson Navigation Company, Inc. has signed contracts with Paceco Corporation for the purchase of three new 65 long-ton capacity cranes and modifications to upgrade three existing cranes at its Sand Island Terminal in Honolulu Harbor. The investments are part of a broader $60 million terminal expansion and modernization program Matson is undertaking to prepare its operational hub in Hawaii for the arrival of the four new ships that the company has on order.

Matson has two Aloha Class ships under construction at Philly Shipyard in Philadelphia with deliveries scheduled for the third quarter of 2018 and first quarter of 2019, respectively. The 850-foot long, 3,600 TEU vessels will be Matson’s largest ships and the largest containerships ever built in the U.S.

Matson has also ordered two Kanaloa Class vessels from General Dynamics NASSCO in San Diego with deliveries scheduled for the end of 2019 and mid-year 2020. These ships will be combination container and roll-on/roll-off (ConRo) vessels built on a 3,500 TEU vessel platform 870 feet long and 115 feet wide, with enclosed garage space for up to 800 vehicles. with a combined value of approximately $930 million and deliveries starting next year.

All four new vessels will have state-of-the-art green technology features, including a fuel efficient hull design, double hull fuel tanks, fresh water ballast systems and dual-fuel engines, meaning that they will be able to operate on either conventional fuel oils or, with some adaptation, LNG. These advancements are important to Hawaii as a means to reduce fuel consumption, and will result in significant emissions reductions over time.

The new cranes will be built by Mitsui Engineering & Shipbuilding (MES), delivered next year and installed at Matson’s Sand Island Terminal in Honolulu in early 2019. They will have greater lifting capacity, height and reach than Matson’s existing cranes, enabling full service of the company’s new larger Hawaii vessels going into service over the next three years. They are also more energy efficient, easier to maintain and will be equipped with fiber-optic cabling, enabling faster and more accurate communication of data used in Matson’s container tracking system.

Matson will use the new cranes to replace three older and smaller cranes, while upgrading three other existing 40 long-ton cranes to the same 11.5 kv electrical system and fiber-optic cabling as the new cranes.

Matson’s investments in these terminal improvements are a cornerstone of the State of Hawaii’s Harbor Modernization Plan, which includes the reinforcement of berths in Honolulu Harbor to support the expansion of Matson’s Sand Island Terminal.