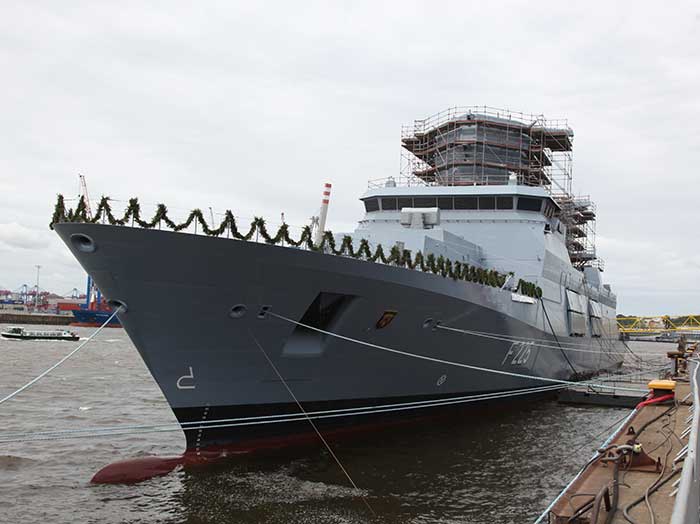 Fourth and final ship in the F125 series, Rheinland-Pfalz, was christened in Hamburg last month

JUNE 8, 2017 — Before the end of this month, the U.S. Navy is expected to put out an RFI for an LCS successor that has evolved from “something that looks more like a frigate” into something that actually is a frigate. That is leading U.S. shipbuilders to pay close attention to what frigate types are being built worldwide — including Germany’s F125 class.

The fourth and final ship in the F125 series, Rheinland-Pfalz, was christened in Hamburg last month.

ThyssenKrupp Marine Systems CEO Dr. Rolf Wirtz noted: “With state-of-the-art technology and a multiple-crew strategy, the F125 sets new standards in naval shipbuilding. It is designed to meet the requirements of our Navy in current and future missions, such as fighting piracy or monitoring movements of refugees in the Mediterranean.”

The ARGE F125 consortium which was awarded the contract to build four F125 class ships for the German Navy in 2007 includes Thyssenkrupp Marine Systems as the lead company and Fr. Lürssen Werft in Bremen. The pre-fitted bow sections have been manufactured at the Fr. Lürssen Werft shipyards in Bremen and Wolgast. Construction of the stern sections, the joining of the two sections and further fitting out is being carried out at Blohm+Voss Shipyards in Hamburg.

The four 125 class frigates will begin the replacement of the German Navy’s eight (Bremen type) 122 class frigates. The ships were developed specially for current and future deployment scenarios for the German Navy. In addition to the traditional tasks of national and alliance defense, the 125 class frigates are designed for conflict prevention, crisis management and intervention/stabilization operations in the international arena. The ships are capable of remaining at sea for 24 months, providing significantly increased availability in the deployment region. This capability is supported by a smaller crew and a multiple-crew strategy which permits a complete change of crew during deployment.