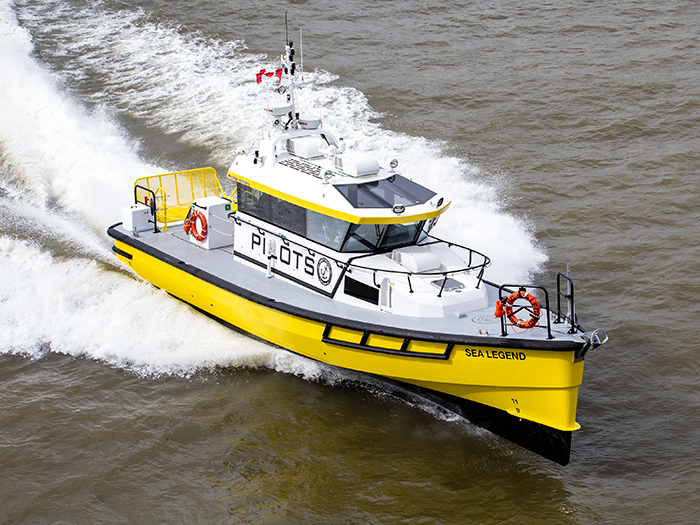 Canada’s Sea Legend Pilotage is set to take delivery of a composite FRP hulled Stan Pilot 1605 that will achieve a speed of 29 knots compared with the 20 knots of its current aluminum hulled pilot boats. The reduced weight of the FRP vessel will also reduce fuel consumption significantly, lowering both operating costs and emissions. The composite nature of the hull requires much less maintenance, meaning the vessels are a shrewd investment for a long-term service provider.

“We were attracted to this vessel because, in our experience, pilot boat speeds are often ‘best case scenario’. That’s not the case with the Stan Pilot vessels – we can be certain they will reach the 29 knots list speed,” he says.

“Achieving compliance can be a complex and time-consuming process,” says Damen Area Manager North America Daan Dijxhoorn, “but Damen’s previous experience in delivering vessels to Canada provided the groundwork for a smooth transition.”

After being built at Damen’s specialist in composite construction, Damen Shipyards Antalya, Turkey, the Stan Pilot 1605 FRP was outfitted at Damen Shipyards Gorinchem, the Netherlands, where Transport Canada was able to inspect the vessel.

Though the Stan Pilot 1605 FRP is part of Damen’s standard portfolio, the Sea Legend vessel underwent a safety equipment upgrade and also includes some custom features, including a man overboard scoop.

The scoop is a sophisticated piece of kit that retrieves people from the water and can be used even when the person has lost consciousness. The control for this function is located at the stern, from where the vessel can also be controlled during an emergency.

Given the specificity of the order, McGill is vey positive about his experience with Damen.

“We are very impressed,” he says. “I’ve built quite a few boats over the years and I’ve never experienced service like this before. Often the relationship with the shipyard ends as soon as the vessel is delivered, this is definitely not the case with Damen.”

The Stan Pilot 1605 FRP is being delivered to Canada by a heavy-lift ship and will arrive in mid-May.