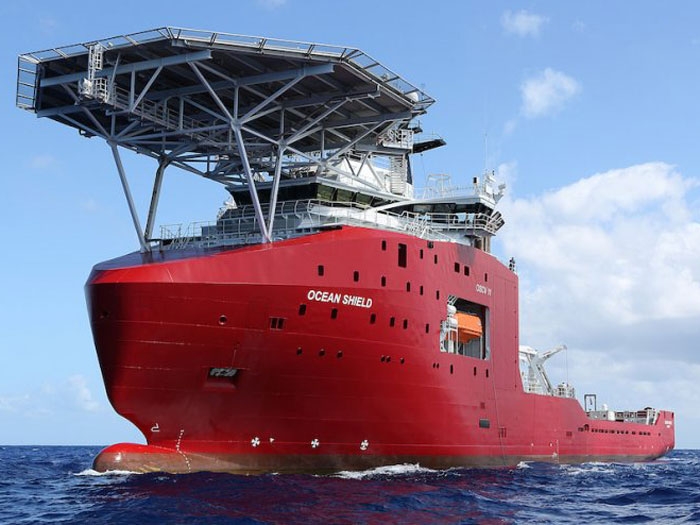 APRIL 7, 2014 — Underwater sounds consistent with the pings from aircraft black boxes have been picked up by an Australian Defense Vessel originally ordered as an offshore construction vessel (OCV) by DOF Subsea (see earlier story). Now part of the hunt for a missing Malaysian airlliner, the Australian Defense Vessel Ocean Shield, the former Skandi Bergen, was acquired in 2012 to give Australia humanitarian and disaster relief capability until the arrival of two new Landing Helicopter Dock (LHD) ships. It is also equipped to undertake patrols in the Southern Ocean providing surveillance, detection and apprehension of any vessels operating illegally.

A U.S. Navy team is on board operating the towed pinger locator (TPL) that detected pinging signals, April 6.

According to the U.S. Navy, the TPL heard consecutive pings at one second intervals. At the time of detection the TPL was at a depth of 300 meters, which is well above the optimal search depth where a black box would typically be detected.

Upon detection, the Ocean Shield crew turned off as much noise-producing equipment as possible to reduce the chance of false alarms, and the signal was again held for over two hours at a TPL depth of 1,400 meters. The signal strengthth increased and then faded, as would be expected with the ship moving toward then away from the signal.

After the signal was lost the team reeled the TPL back in to prepare for a course change to a reciprocal course to get a better line of bearing in the contact location.

While traveling on the reciprocal course, the Ocean Shield team again detected a separate set of pings while with the TPL set to an optimal depth of 3,000 meters. On this course the detection time lasted for about 15 minutes. The TPL detected two signals at the same frequency but in different locations. This would be consistent with the MH370 black box because the plane had both a flight data recorder and cockpit voice recorder.

Since the current data remain inconclusive, the team is moving foward to reacquire the signal and use the Bluefin-21 Sidescan Sonar to get a picture of any potential wreckage. This is a 24-hour operation and the Navy team is working around the clock with its Australian partners to reacquire the black box signal.