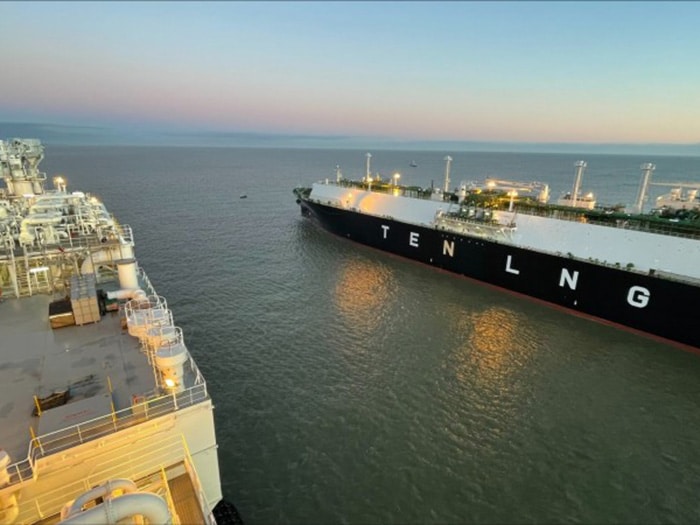 As Germany ramps up its efforts to replace imports of Russian natural gas, the first full cargo of liquefied natural gas (LNG) has been delivered to the Wilhelmshaven LNG terminal, operated by Uniper. The Tsakos Energy Navigation LNG carrier Maria Energy, arrived today with approximately 170,000 cubic meters of LNG that had been loaded at the Venture Global export facility in Calcasieu Pass, La., on December 19, 2022.

The Wilhelmshaven FSRU vessel, the Hoegh Esperanza, had previously arrived in the port on December 15, with an initial cargo of 165,000 meters of LNG loaded in Spain.

“The successful delivery of the first full LNG cargo to the Uniper terminal in Wilhelmshaven is a testament to the strong partnership between Uniper, Venture Global, and Tsakos Energy Navigation,” said Niek den Hollander, Uniper CCO. “The use of LNG as a reliable energy source is crucial for the security of supply for Germany and Europe. We are committed to contribute our part by bringing more LNG to the European market and especially Germany via the Wilhelmshaven and Brunsbüttel regas terminals.”

“Venture Global is very proud to supply the first full cargo of LNG ever delivered to Germany, and we congratulate Uniper and the German government for their swift action to build the infrastructure needed to make this historic day possible,” said Venture Global CEO Mike Sabel. “As strategic partners, we look forward to providing long-term security of energy supply to our allies through the continued delivery of clean and reliable U.S. LNG.”

Commercial operations at the Wilhelmshaven LNG terminal are expected to start in mid-January 2023.