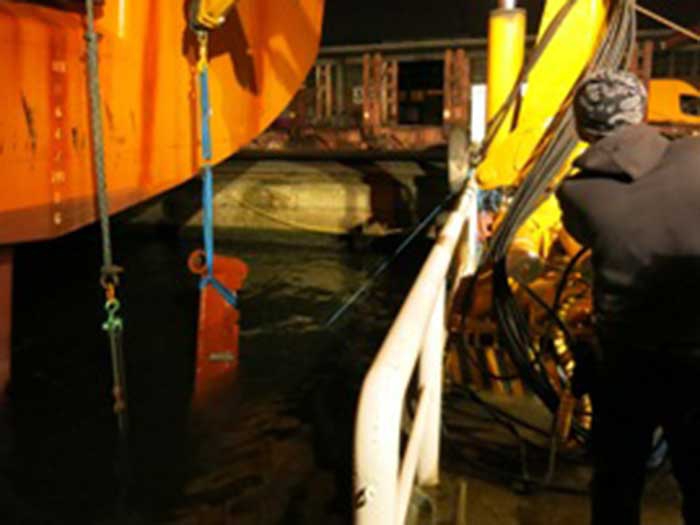 JANUARY 9, 2017 — Recently, a 7,071 dwt tanker was maneuvering in the port of Antwerp when it experienced a steering gear problem.

The vessel managed to safely berth alongside and carry out cargo operations but emergency repairs where needed before the vessel could continue and at around 4.00 a.m. the owner dialed the emergency number for Hydrex Underwater Technologies’ fast response team.

Twenty-four hours later, the vessel was heading towards its next port of call with a fully functioning rudder.

“Immediately after taking the call, we mobilised a dive team which carried out an underwater assessment of the rudder, communicating the findings to the owner’s technical team ashore,” says Hydrex Production Executive Dave Bleyenberg. “The survey found that the Becker flap had almost completely detached from the rudder, resulting in serious steering problems.

“The top hinge had completely come loose, while the weight of the flap had bent the pin that attached it to the rudder at the bottom hinge. It was hanging on by a thread. The edge of the rudder was also cracked and deformed next to the lower hinge, which meant that removal of the flap was less than straight-forward.”

Once the repair plan was approved, the Hydrex workboat berthed alongside the tanker where the dive team offloaded the equipment they needed to repair the rudder. It was early afternoon on that same November day.

“After arriving at vessel, we began securing the rudder flap with chain blocks before diver welders burned off the area of the flap that connected it to the bent pin. Once this was done, the divers left the water and the crew of the tanker slowly moved the rudder’s position until the flap disconnected from the rudder and came to rest completely on the chains,” says Bleyenberg.

The flap was then sent to the manufacturer’s workshop for repair for reinstallation at a time than fits the vessel’s operational schedule.

“In less than 24 hours we were able to mobilize a team to the vessel, perform a detailed inspection to assess to situation, devise a fast underwater solution and carry out the repair. This is a good example of the start-to-finish services we offer our customers,” says Bleyenberg.