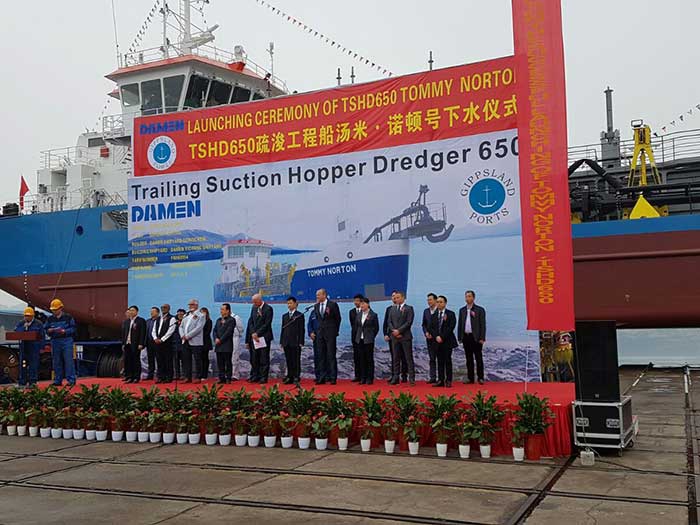 APRIL 25, 2017 — Damen Shipyards Group reports that the Damen Yichang Shipyard in China has now launched a Trailing Suction Hopper Dredge (TSHD) 650 ordered by Gippsland Ports of Victoria, Australia, in December 2015. The vessel, named Tommy Norton, is now alongside the yard’s new quay undergoing final commissioning, after which she will sail for Shanghai to undertake sea trials. Once those are completed she will sail for Australia on her own keel for dredging trials and delivery. The official handover will take place in August.

Among its various marine infrastructure responsibilities for the state of Victoria, Gippsland Ports is the designated waterway manager of 1,431 sq. km of some of the largest and most beautiful waterways in Australia, stretching from Anderson Inlet to Mallacoota over 720 km of the south-eastern coastline of Victoria. The new dredger will be used to maintain entry to the port of Lakes Entrance and the Gippsland Lakes system, which is used by recreational, fishing and supply vessels.

To achieve this mission effectively the TSHD 650 has been modified to increase the installed propulsion power, allowing her to manage the strong currents encountered in the harbor’s entrance. To minimize disruption to the local ecosystem, an anti-turbidity valve has been fitted on the overflow to reduce air bubbles and visible plumage in the water.

Additional features include an indication package to measure soil density. This allows the suction pipe to be angled precisely for accurate operations. The dredging process will be made even more efficient by the installation of the navigational dredging aid, NavGuard, indicating the area and quantity of substrate dredged.

Capable of dredging to depths of 15 m, the dredge has been built with self-emptying capabilities with bottom doors for dumping and the choice of either a bow connection or rainbow expulsion for beach reclamation work.

To increase the vessel’s payload capacity when dredging sand with a high specific density, Damen has reduced the freeboard of the vessel and applied a dredge mark.

“The client originally came to Damen after seeing the quality of our tugs operating in Australia,” commented Damen Sales Manager Asia Pacific Vincent Maes. “In a visit to China they were very impressed with the quality of the vessels being produced at Damen’s Yichang Shipyard, now boosted even further by the new jetty that makes on-site commissioning possible.”

Gippsland Ports Board Chairman, Mr Geoff Hocking, attended the launching of Tommy Norton and commended Damen Shipyards Group and joint venture yard, Damen Yichang Shipyards, on the build quality of Tommy Norton and on the constructive working relationship between builder and client.

“We are looking forward to taking delivery of the new dredger at our port in the very near future,” he said, “and are very confident that Tommy Norton will serve us well for many years to come. Particularly as the vessel has been configured and equipped with contemporary systems to meet the quite specific operational needs of our intended application.”