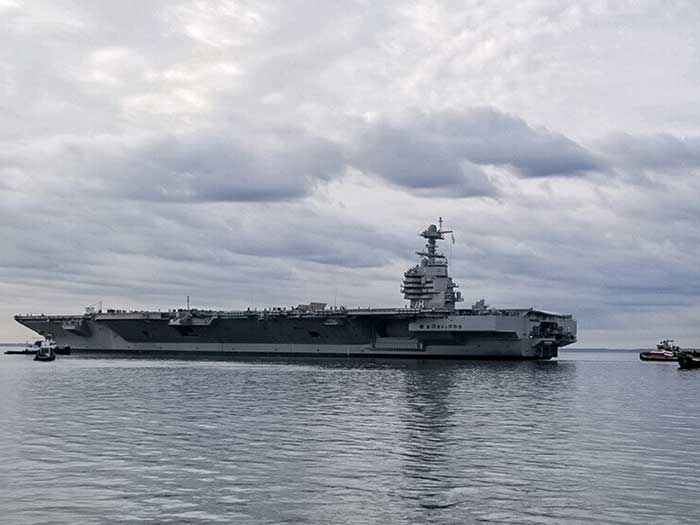 After a 15-month pierside maintenance period (Post Shakedown Availability), the aircraft carrier USS Gerald R. Ford (CVN 78) got underway from Huntington Ingalls Industries’ Newport News Shipbuilding (HII-NNS) division October 25 for sea trials. Its departure came against a background of strong congressional criticisms of delays to the delivery of the ship — and in the carrier program overall.

“I am proud of the crew’s efforts to get USS Gerald R. Ford back out to sea,” said Secretary of the Navy Richard V. Spencer. “The Navy has diligently tackled issues associated with this first-in-class ship and will continue to do so. All are eager to demonstrate Ford’s capacity to deliver combat power. There is more work to do, but this is a great milestone.”

The issues Secretary Spencer referred to include persistent problems with the ship’s weapons elevators.

When asked about the original delivery and deployment dates, VADM Moore said the Ford should have been deployed 2018, a year ago. Under questioning from Congresswoman Luria, VADM Moore said “I think we’ll beat” 2024, but did not offer a certain answer.

“I just truly don’t feel like this is a great investment as a taxpayer – $13 billion on a ship that’s going to deploy six years past its original design timeline,” Congresswoman Luria said. She added that the USS Ford amounted to a “$13 billion nuclear-powered berthing barge.”

Secretary Spencer discussed Congresswoman Luria’s questioning at a Brookings Institution event October 23. At one point, he said : “Not one of her comments was, ‘How can I help?’”

House Armed Services Subcommittee on Readiness Chairman John Garamendi was quick to back up the Congresswoman.

“When I called upon Congresswoman Luria to question the Navy on its dismal record of maintaining and repairing its ships, I knew her questions would go to the heart of the matter. Congresswoman Luria is a retired U.S. Navy Commander with twenty years of experience, and a graduate of the U.S. Naval Academy. She has expert knowledge and firsthand experience with this issue; her questions were entirely appropriate and concentrated on the important oversight responsibilities we must undertake as members of Congress. The deployment of the USS Gerald R. Ford has been delayed six years and is attenuating the progress and strength of the carrier fleet. Further, six aircraft carriers are currently shoreside for repairs, and Congresswoman Luria appropriately pressed the Navy for details and a timeline on the repairs. These are critically important issues that require transparency and immediate attention from the Navy, and I applaud Congresswoman Luria for conducting appropriate oversight of the matter and working to improve processes. Secretary Spencer’s comments were unwarranted and contrary to the important constitutional obligation Congress has to conduct oversight. The Readiness Subcommittee is focused on resolving the urgent and serious need to augment the ship repair processes within the Navy. I urge the Secretary to work with Congress and provide complete information so we can work together to meet America’s national security needs.”

Prior to getting underway, CVN 78 conducted a multi-day, pier-side “Fast Cruise,” where the crew worked through simulated at-sea operating scenarios. Gerald R. Ford then departed NNS and headed into the Atlantic Ocean for sea trials, putting into practice lessons learned from the Fast Cruise and starting a critical phase of underway testing.

While at sea off the Virginia coast, the crew, in cooperation with NNS engineers and shipyard employees, will run through a comprehensive sequence of evolutions to test and validate systems maintained or modified during the Post Shakedown Availability (PSA).

After the current sea trials, CVN 78 will return to Naval Station Norfolk to enter a postdelivery test and trials period to certify fuel systems, conduct aircraft compatibility testing, certify the flight deck, and test the combat systems installed aboard the ship.

You can watch Congresswoman Luria’s questioning of Navy brass in the video below.