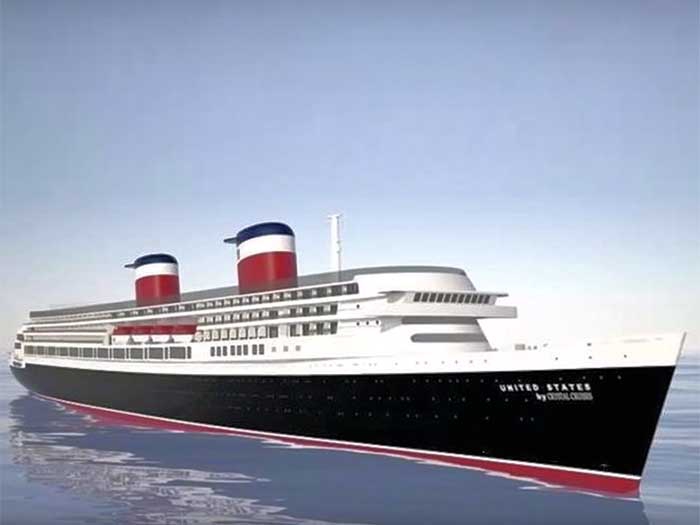 AUGUST 8, 2016 — Sadly, but hardly surprisingly, Genting Hong Kong subsidiary Crystal Cruises won’t be going forward with its plans, announced in February (see earlier story), to save “America’s Flagship,” the SS United States, and “embark on the enormous undertaking of bringing the ship into compliance with the latest standards, and returning her to oceangoing service.”

The plan was dependent on the results of a technical feasibility study and, on August 5, Crystal Cruises said that it had determined that while the SS United States is structurally sound, the technical and commercial challenges associated with returning the historic liner to service as a modern cruise ship have “unfortunately proven insurmountable.”

As a show of support for the vessel, Crystal Cruises will be making a significant donation of $350,000 to aid in the SS United States Conservancy’s ongoing mission to save the ship. The Conservancy intends to resume its pursuit of stationary redevelopment opportunities for the iconic ship.

Crystal and the Conservancy had hoped to convert ship, launched by Newport News Shipbuilding in 1952, into a modern, luxury cruise ship that would comply with all modern safety and technical standards.

“Over the past six months, Crystal has conducted an extensive feasibility study to restore ‘America’s Flagship’ to oceangoing service. Unfortunately, the hurdles that would face us when trying to bring a 65-year-old vessel up to modern safety, design and international regulatory compliance have proven just too great to clear in both a technically and commercially responsible manner,” said Crystal President and CEO Edie Rodriguez.

“While it has been determined that Crystal’s exciting vision for the ship would have required overcoming various technical hurdles and major changes to her historic design, the studies performed have confirmed the ship is structurally sound,” said Susan Gibbs, Executive Director of the SS United States Conservancy. “America’s Flagship continues to hold enormous potential as a stationary mixed-use development and museum in New York or another urban waterfront setting. The SS United States Conservancy remains deeply committed to saving this unique and powerful symbol of the nation’s strength, history, and innovation.”

Led by retired U.S. Coast Guard Rear Admiral Tim Sullivan, Crystal’s team of maritime experts and engineers conducted numerous assessments on the ship in the Port of Philadelphia, where it has been docked for 20 years.

The evaluation and testing included in-depth assessments of the ship’s structural condition; underwater inspections of the hull by divers; the examination of her fuel and salt water ballasting tanks; and a series of engineering studies to deduce what would be needed to bring her back into service.

The study concluded that while the ship is remarkably intact and structurally sound, modifying the ship for today’s standards for oceangoing service (SOLAS) would require significant changes to the hull that would pose stability challenges.

Additionally, the installation of a modern, state-of-the-art diesel electric propulsion plant would have necessitated altering of the existing shaft lines and rebuilding about 25 percent of the hull to reconfigure the ship to a twin shaft-twin rudder arrangement.

While it was known that the vessel would need to have been essentially rebuilt from the inside out, these specific challenges, among others, collectively posed significant risk to the success of the project.

“Our company has great affection for this historic and irreplaceable vessel, and we will be making a $350,000 donation which will help support the Conservancy preserve the vessel through the remainder of the year,” said Rodriguez. “We firmly believe the SS United States is an American treasure and deserves to be preserved and redeveloped as a stationary destination for future generations to experience and enjoy.”

The Conservancy will immediately restart its aggressive outreach to qualified developers and investors to secure the ship’s future, while continuing its ongoing mission to educate the public about the legacy of the vessel and building its museum collection and archives.

“The Conservancy is deeply grateful to Crystal Cruises for recognizing the SS United States’ historic importance and for working so hard on the ship’s behalf,” said Gibbs. “I would also like to thank our members and supporters from across the country and around the world for their continued support. Together we will continue to work tirelessly to save America’s Flagship and honor the legendary liner’s legacy.”