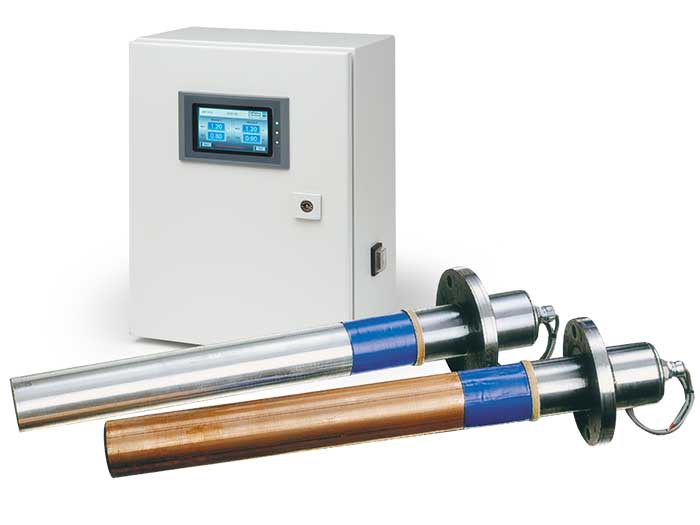 The MGPS systems are designed to prevent biofouling in sea water pipework serving the main engines and ancillary systems.

The sstems involve fitting pairs of copper and aluminum anodes in the seachests which are wired to a control panel. In operation, the copper anodes produce ions which create an environment where barnacle and mussel larvae do not settle or breed, but are carried through the system to discharge. At the same time, the aluminum anodes produce ions which create an anti-corrosive coating on the internal surfaces of pipes.

An important feature is that the MGPS systems operate effectively with very small concentrations of copper – around 2 parts per billion – resulting in a system that is environmentally benign.

“The MGPS systems on these ships are some of the largest that we produce and are ideally suited to treating large volumes of sea water”, said Adam Rogers, sales manager at Cathelco.

As an example, the seachests serving the air conditioning systems are installed with pairs of copper and aluminum anodes measuring 1,100 mm in length and 140 mm in diameter.

Both new Quantum class ships will also be installed with Cathelco ICCP systems to protect the underwater hull surfaces against corrosion.

In operation, the reference electrodes measure the electrical potential at the hull/seawater interface and send a signal to the control panel which automatically raises or lowers the outputs to the anodes. In this way, the hull receives the optimum corrosion protection at all times.

Cathelco has also received an order to supply MGPS and ICCP equipment for the first in the series of Project Edge vessels which are to be built for Celebrity Cruises by the STX France shipyard.

The MGPS systems will protect a total of six seachests, plus a small strainer which will be fitted with Omni anodes. The largest seachest with a maximum flow rate of 4,800 cu.m an hour will be installed with 6 pairs of copper and aluminum anodes to protect against bio-fouling in the pipework system.

The ship will be safeguarded against hull corrosion with Cathelco forward and aft ICCP systems. The 300 amp forward system will consist of an arrangement of two 150 amp disc anodes mounted port and starboard and two reference electrodes connected to a Cathelco Quantum control panel. The 400 amp aft system will be of similar design to protect the stern area.