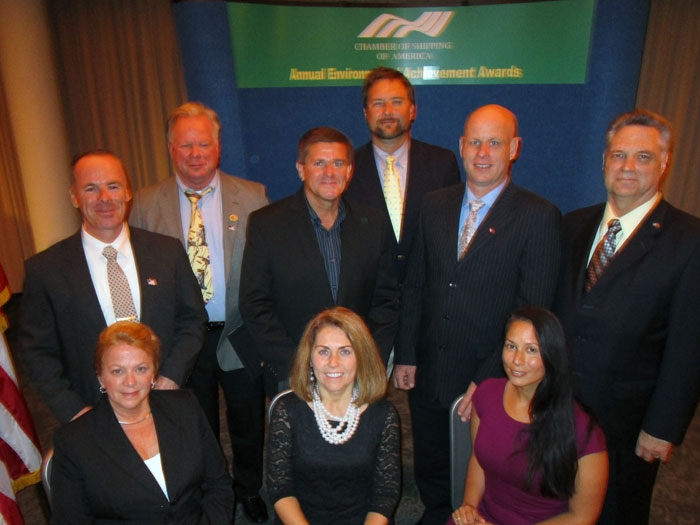 NOVEMBER 13, 2014 — Eighty-nine Crowley Maritime Corp.-owned and operated vessels were honored with Certificates of Environmental Achievement for years of safe operations during the eleventh-annual Chamber of Shipping of America (CSA) awards ceremony today.

Crowley received an award for each vessel that worked at least two consecutive years without an environmental incident. The 89 vessels have logged a combined 968 years of service without incident.

Each year, CSA invites all owners and operators of vessels that work on oceans or inland waterways to nominate their vessels for Environmental Achievement awards. Approximately 1,386 vessels from 58 companies, including Crowley, were recognized this year at the ceremony held in Washington, D.C. The vessels honored accumulated a total of 10,749 years of safe operations.

Forty-seven of Crowley’s vessels have gone without incident for 10 or more consecutive years, including the following: Saturn, 45 years; Kuparuk River and Kavik River, each with 44 years; and Sag River, 39 years.

Crowley has been honored with Environmental Achievement Awards each year since at least 2005.

“Safety is the No. 1 core value at Crowley. This includes the safety of our people and those around them as well as the environment,” said Mike Golonka, vice president, ship management. “These awards recognize the rigorous work of our crews, who ensure that our vessels operate safely and in an environmentally responsible manner.”

Crowley published a Safety in Towing Handbook two decades before the Oil Pollution Act of 1990, evidence of the company’s long history of environmental protection. This has developed into a strong company culture of environmental stewardship, focusing on greener technology, more environmentally friendly operations and partnerships that help build a greener planet.

The following is a list of vessels owned or operated by Crowley, or one of its subsidiaries, that received environmental excellence awards this year from the CSA: