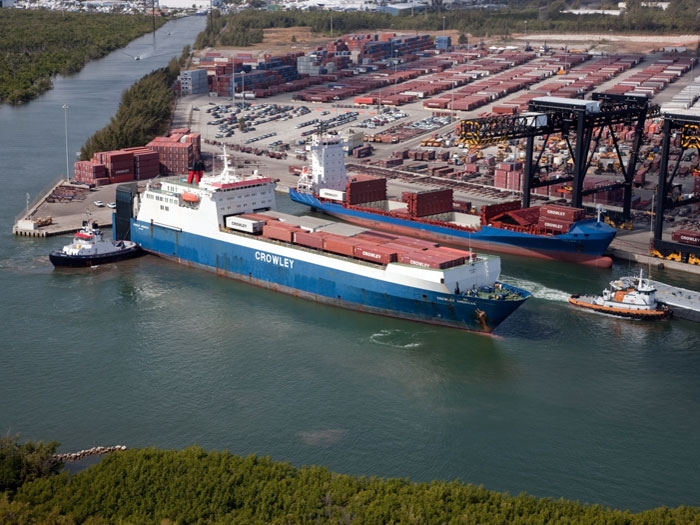 Starting in mid-November, the new VSA between Crowley and Seaboard Marine will provide their customers with weekly service on a larger ship moving directly between Port Everglades, FL, and Rio Haina, Dominican Republic.

By sharing vessel space, Crowley and Seaboard can continue to provide a high level of service through more efficient operations, while at the same time reducing carbon emissions in these trade lanes.

”These two arrangements permit us to gain efficiencies while enhancing schedule integrity to our customers.  Transit times to and from Costa Rica, as an example, will be improved,” says Edward Gonzalez, Seaboard Marine President and CEO.  “We are also pleased that we can reduce our carbon footprint by making these changes.”

Under the new Dominican Republic agreement, a vessel will discharge and load in Port Everglades each week on Wednesday then depart for Rio Haina, for arrival on Saturday before departing northbound on Sunday.   While Crowley and Seaboard will equally share vessel space, each carrier will continue to provide its full complement of equipment types and other services utilized by their Dominican Republic customers respectively.

Seaboard will continue to offer a weekly Sunday sailing from Port Miami to Rio Haina while Crowley will still sail weekly on Sunday from Port Everglades to Rio Haina.

Switch to low sulfur
In addition, Seaboard Marine also announced it would be switch to burning low sulfur fuel in its vessels starting in mid-November. The move is to comply with stricter IMO emissions regulations for the North American Emissions Control Area (ECA, which will require ships to burn fuel with sulfur content of no higher than 0.1 percent. Ships can also comply using exhaust gas scrubbers or by burning Liquefied Natural Gas (LNG).