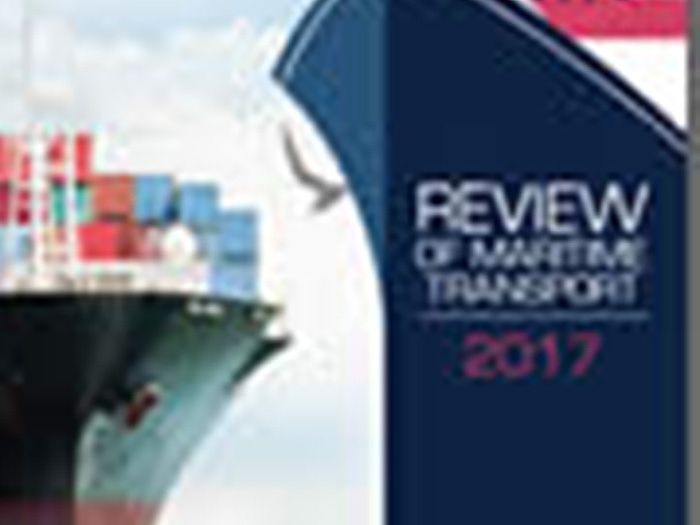 OCTOBER 30, 2017 — Seaborne trade grew by 2.6% in 2016, to reach 10.3 billion tons, but the pace remained below the historical 3% average, and demand for shipping continued to lag supply, says the United Nations Conference on Trade and Development (UNCTAD).

The just published UNCTAD Review of Maritime Transport 2017 says that the world’s commercial fleet grew by 3.2%, to reach 1.86 billion dead-weight tons in early 2017, and that the persistent imbalance between supply and demand is keeping freight rates and earnings low in most segments.

The squeeze was felt in particular by the container shipping market, which last year reported a collective operating loss of $3.5 billion.

UNCTAD sees are risks associated with the recent mergers and mega alliances among container carriers.

“The risk is that growing market concentration in container shipping may lead to oligopolistic structures,” says Shamika N. Sirimanne, Director of the UNCTAD Division on Technology and Logistics. “In many developing countries’ markets, there are now only three or even fewer suppliers left. Regulators will need to monitor developments in container shipping mergers and alliances to ensure there is competition in the market.”

Revisiting the rules governing consortiums and alliances may be necessary to determine whether these require new regulations to prevent market power abuse and to balance the interests of shippers, ports and carriers, says UNCTAD.

The UNCTAD review says that world container ports face mounting pressure from ever larger ships. In addition, they must cope with the cascade of vessels from main trade routes to secondary routes, as well as increasing concentration and consolidation in liner shipping and growing cybersecurity threats.

Although investment is key for ports to improve, the amount needed to accommodate ever larger ships may not be worth the extra cost, unless the bigger vessels guarantee more cargo. Otherwise, ports will have invested in larger yards and additional equipment to handle the same total volume.

Between 2000 and 2016, a total of $68.8 billion in private investment was committed across 292 port projects aimed at improving port infrastructure and superstructures. Private operators not only improve port infrastructure and services, but also contribute to better port sustainability and competitiveness, bringing new technologies and improving supply chain management, hinterland connectivity and door-to-door delivery.

The review says that, on average, transport and insurance costs account for about 15% of the value of imports, but this is much higher for smaller and more vulnerable economies; on average 22% for small island developing states, 21% for the least developed countries and 19% for landlocked developing countries.

Helping developing countries improve the factors behind high transport costs is key for economic development. This can be done through soft measures, such as providing training and facilitating reforms, or hard measures, such as upgrading infrastructure and improving equipment. The long-standing technical cooperation work of UNCTAD on the automation of customs procedures and the integration of trade and other processes of government agencies through the Automated System for Customs Data shows that such efforts can reduce transaction costs, shorten cargo dwell time and increase transparency.

New technologies are transforming the maritime transport industry, improving economic efficiency, optimizing logistics management systems and operations and increasing connectivity, including digital connectivity. Yet these technologies are also raising new concerns, such as increased cybersecurity threats and weakened protection for privacy and financial data. Public and private stakeholders should therefore work together to better understand, assess, manage and monitor new technologies, to ensure that ships navigate safely and that important offshore and onshore information remains secure.

Cybersecurity concerns should be reflected in the regulatory frameworks governing the maritime sector, and regulatory compliance should be encouraged and supported. The enforcement of existing cybersecurity regulations is important, as is the development of additional standards and policies. Best practices, guidance and standards adopted to date should be considered, along with the five functional elements contained in the IMO guidelines on maritime cybersecurity risk management: identify, protect, detect, respond and recover.