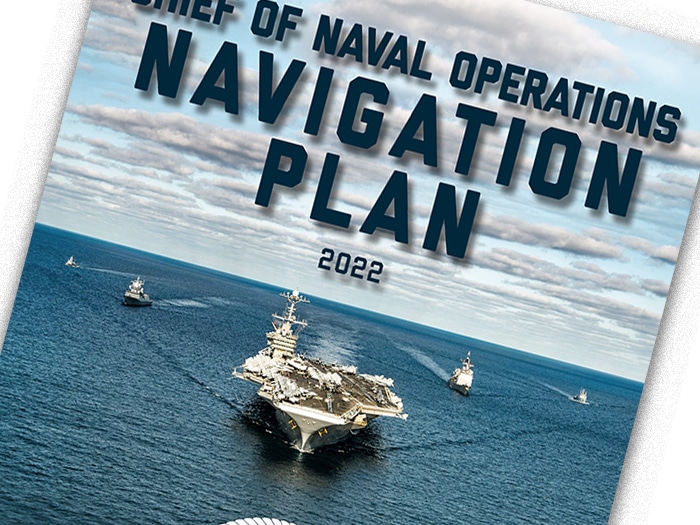 Chief of Naval Operations (CNO) Adm. Mike Gilday has released Navigation Plan 2022 to the fleet. It aims to outline how the U.S. Navy “will build, maintain, train, and equip a dominant naval force to strengthen strategic partnerships, deter conflict, and if called upon, help win the nation’s wars.”

“Past and ongoing threat-informed analysis, both inside and outside the Department of Defense, underscores the need for a more capable, larger Navy,” says the document. “The Navy must set a sustainable trajectory now to ensure we remain the combat-credible maritime force our nation needs in the future. Retiring legacy platforms that cannot stay relevant in contested seas—and investing in the capabilities we need for the future—is essential for our national security.”

“The Navy must become a hybrid fleet,” says Navigation Plan 2022. “Manned, multi-mission platforms will remain at the core of our future fleet, but augmented with new platforms and new capabilities. We will add to our current fleet a host of manned, unmanned and optionally- manned platforms operating under, on, and above the seas. This future fleet will deliver an assured strategic deterrent; greater numbers of undersea capabilities; a mix of large and small modern surface combatants; and a resilient logistics enterprise that can sustain our distributed naval force.”

“In the 2040s and beyond, we envision this hybrid fleet to require more than 350 manned ships, about 150 large unmanned surface and subsurface platforms, and approximately 3,000 aircraft,” says the plan, which forecasts the future fleet to consist of:

“We will augment the force with an evolving complement of thousands of small, rapidly adaptable, and attritable unmanned platforms. These enablers will increase our sensing resilience, persistence, and coverage, provide cross-domain kinetic and non-kinetic effects, and enhance the survivability and sustainability of the future fleet.”

Meantime, all of this has to get Congressional approval and the Congressional Research Service has just released its most recent “Navy Force Structure and Shipbuilding Plans: Background and Issues for Congress” which puts some perspective on what will be required to translate the CNO’s vision into legislated and authorized reality.