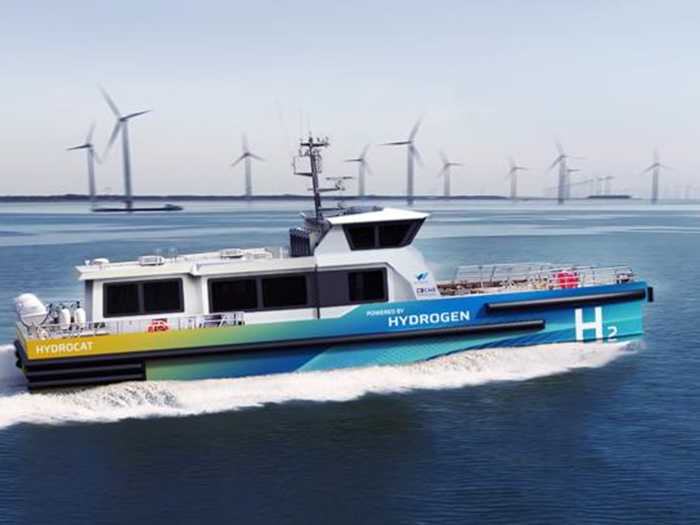 It seems that CMB’s interests in hydrogen as a marine fuel are not confined to operating this comparatively small vessel, the Hydroville, as an eco friendly employee shuttle.

CMB has now acquired Revolve Technologies Limited (RTL), which developed the engines used in the Hydroville and which has been been pioneering and developing hydrogen combustion engines (H2ICE) and systems for more than 10 years. The business will be fully integrated under CMB Technologies, the Innovation and development division of CMB

Today, CMB released details of three more hydrogen projects, all of them using hydrogen as a combustion engine fuel rather than in a fuel cell.

CMB reports that it is working with Japanese shipyard Tsuneishi Facilities & Craft (TFC) to build the world’s first passenger ferry powered by a dual fuel hydrogen-diesel internal combustion main engine. After receiving the necessary regulatory approval, the vessel, to be called the HydroBingo will be built at TFC’s facilities in Onomichi, Japan and is expected to be delivered in 2021.

By combining TFC’s state-of-the-art shipbuilding capabilities and CMB Technologies’ extensive knowhow in marine hydrogen systems, the parties say, they hope to build a revolutionary ship that will be a milestone in the journey towards zero carbon emission shipping. This new development also supports Japan’s vision to become a leading hydrogen society by 2050.

Meantime, in Europe, CMB technologies has been working with Netherlands based offshore wind farm services provider Windcat Workboats to develop a hydrogen fueled Crew Transfer Vessel (CTV) design. One of the first customers will be electricity utility Vattenfall, which has signed a contract with Windcat Workboats for the provision of (CTVs) for the Hollandse Kust Zuid 1&2 offshore wind farm in the Dutch North Sea. The project, located 22km off the coast, is expected to be commissioned in 2022. The hydrogen CTV – named HydroCat – will be able to transport 24 service engineers from the coast to the offshore wind farms at a cruise speed of 25 knots, propelled by two 1,000 horsepower engines and will consume 170 kg of hydrogen per day.

Now, after an extensive period of testing, BeHydro says it aims to commercially launch its first hydrogen medium speed engine in the course of 2020. Engines currently under development have a power range between 0.8 and 2.8 MW and are available in 6, 8, 12 and 16 cylinder configurations