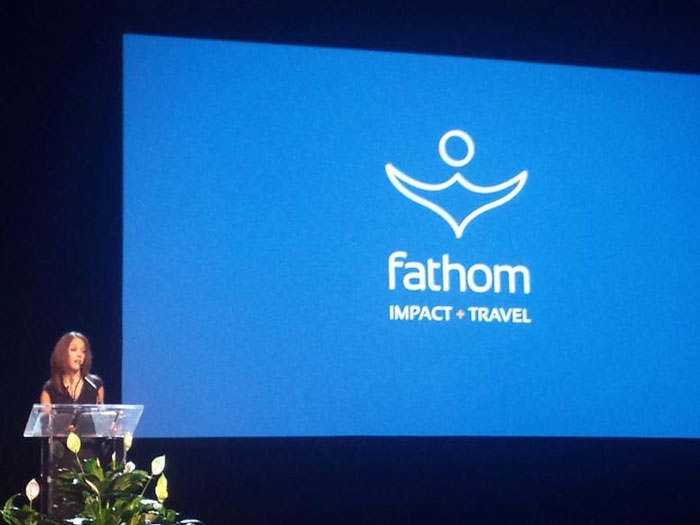 Carnival Corporation CEO Arnold Donald launched the new cruise line last week at an event at the United Place Theater, a former Loew’s movie theater in New York City’s Washington Heights district, where the predominant population is of Dominican Republic heritage — an apt choice as fathom’s first destination will be the Dominican Republic, a country known for its spectacular beauty but also one country where the average household income is approximately $6,000 a year and more than two million Dominicans do not have access to piped water.

Beginning in April 2016, fathom will offer seven-day voyages from the Port Miami aboard the MV Adonia, a 710-passenger vessel redeployed from Carnival Corporation’s P&O Cruises (UK) for the start-up of the new operation. Depending on their passions, interests and skills, travelers will have the opportunity to choose from a range of social impact activities and experiences both onboard and onshore. The ship’s destination will be the Puerto Plata region of the Dominican Republic where Carnival’s Amber Cove Port destination is set to open in October, 2015 (see earlier story).

Though Donald framed the launch in the context of Carnival’s considerable record of corporate giving, he also made it clear that fathom is intended to be a profitable venture and that he hopes the Adonia will have a high occupancy rate. “We like to sail with them full, you know that,” he told reporters following the launch announcement.

President of fathom will be Tara Russell, Founder and Chairman of Create Common Good, a food production social enterprise. Described by Mr. Donald as “a non-traditional, social entrepreneur,” Ms. Russell, who led the team that has been working on the design and business model for fathom since late 2013, will also serve as Global Impact Lead for Carnival Corporation.

Though fathom travelers — Carnival does not call them “guests” — will be getting what could be called a “Peace Corps Lite” experience, the impact they make cumulatively will not be light. To ensure that the impact made is meaningful, Ms. Russell has worked with long established local organizations Entrena and the Instituto Dominicano de Desarrollo Integral, Inc. (IDDI). Both organizations have long-established programs in the northern Dominican region. fathom travelers will work alongside Entrena and IDDI across the northern region to help  their programs achieve much greater impact.

Ms. Russel says that by bringing hundreds of travelers to a destination on a regular basis, fathom can make focused and holistic, collaborative contributions in a broad region of the country .

Based on extensive market research, fathom has identified a sizable and growing market of potential social impact travel consumers – approximately one million North Americans who are strongly predisposed, in addition to global travelers already pursuing service-oriented travel experiences worldwide – who will be interested in this type of travel offering.
The company believes fathom will attract a significant number of travelers who have never before cruised. According to research, nearly 40 percent of the individuals who will book a social impact trip on fathom might otherwise never have chosen to cruise.

So, how much will travelers pay, and what will they get? The price for a seven-day trip starts at $1,540 per person. This includes on-ground impact activities and related supplies, on-board impact programs, meals on the ship, a comfortable stateroom with a window, and taxes and fees.

“Your ship sails from Miami on Sunday afternoon and will serve as a comfortable home base throughout your journey. You’ll spend Monday at sea before arriving in the Dominican Republic around midday on Tuesday. For the next three days, you’ll work alongside local people on projects that serve local community needs. On Friday afternoon, you’ll begin your return voyage to Miami, says fathom on its website.

As well as participating in social impact activities, travelers be able to explore the and visit its or take advantage of the different recreational activities available to the entire family of Carnival Corporation brands visiting Amber Cove and the Puerto Plata region.