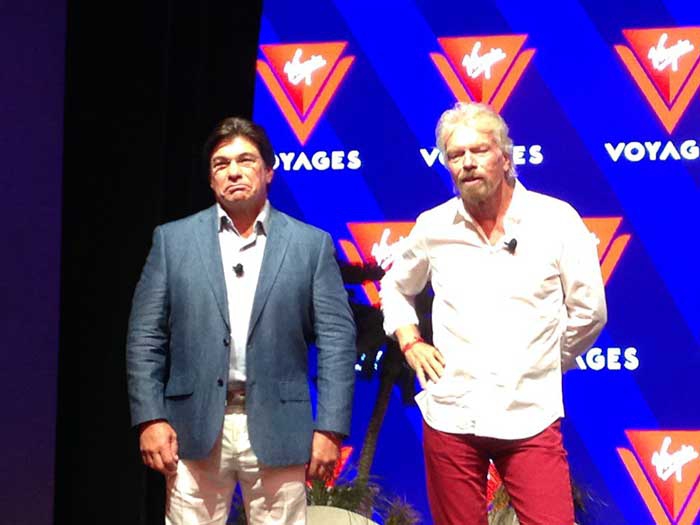 OCTOBER 18, 2016 — At an event in Miami today, Sir Richard Branson’s Virgin Cruises announced that it will be rebranded as Virgin Voyages.

A letter of intent signed last year with shipbuilder Fincantieri for three 110,000 gt, 2,800 passenger ships has now been firmed up. Steel cutting for the first will take place early next year, with the keel being laid in the fourth quarter and the ship entering service in 2020. The other two will follow in 2021 and 2022.

Speaking at the Miami event Branson and Virgin Voyages President and CEO promised “a transformational experience delivering a very ‘Virgin style’ of adventure.”

Virgin Voyages, backed by lead investors Bain Capital Private Equity and Virgin Group, expects the multi-billion dollar financing package for the purchase of its three ships to be finalized shortly. The lead lending partners will be Cassa depositi e prestiti (Cdp) and UniCredit, and the loan will be fully backed by Italian export credit agency SACE and supported by SIMEST, both subsidiaries of Cdp.

Few specifics of the ships were revealed other than that green features will include the use of waste heat technology from Sweden’s Climeon AB that converts low temperature heat (70-120 deg C) into 100% clean electricity. For ship installations, the heat sources are typically the cooling water from the engines and exhaust gases.

The resulting environmental impact will be an estimated 5,400 tons of carbon dioxide savings annually per ship — an amount that would take 180,000 trees 30 years to absorb.

“The Climeon heat power system is an environmental breakthrough, and working with Virgin is of major importance to us. We are excited that Sir Richard Branson and Virgin, with their focus on sustainability, have decided to become a pioneer of this technology. Transforming hot water to electricity will be a major source of energy production going forward,” said founder and CEO of Climeon, Thomas Öström.