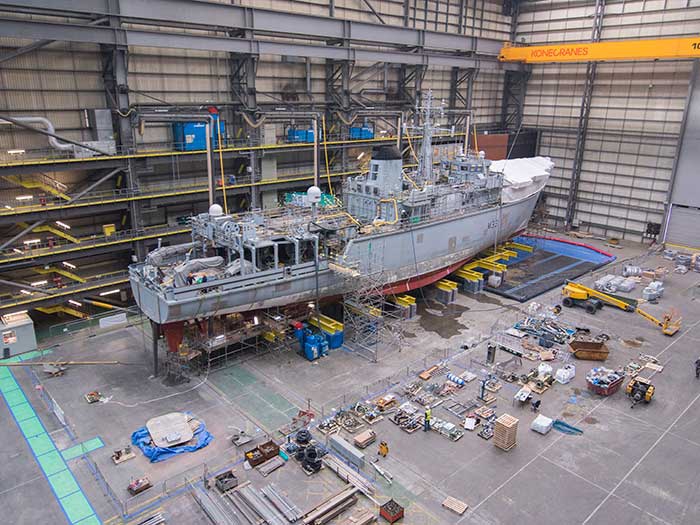 HMS Brocklesby is undergoing the largest work package for a Royal Navy Mine Countermeasure Vessel (MCMV) to date. During her upkeep period, HMS Brocklesby has had her entire propulsion system replaced, including the machinery controls and surveillance system. Other upgrades include overhauling her chilled water plant and fitting new propellers. The ship’s crew have also benefitted from upgrades and refurbishment to the galley.

However, a new way of working at the Portsmouth Naval Base means that she will return to the Royal Navy’s surface fleet four months earlier than Hunt Class vessels in previous upkeeps.

The time saving is thanks to BAE Systems’ engineers being able to work on the vessel under cover in the naval base’s dedicated Minor War Vessels Center of Specialization for part of her refit.

Innovative ways of working have also contributed to the ship reaching her sea trials stage within record time. Using the Minor War Vessels Center of Specialization facilities meant engineers benefited from the cutting-edge mobile working technology and equipment available at the naval base.

David Mitchard, Managing Director, Maritime Services BAE Systems said: “The work carried out on board HMS Brocklesby is the largest refit program for a Royal Navy minehunter we have undertaken, so to begin her sea trials four months earlier than any previous upkeep for a Hunt Class vessel is a terrific achievement.

“This is testament to the new ways of working to maximize how we use the Minor War Vessels Center of Specialization at the naval base, as well as the planning and procedures we put in place to ensure the significantly reduced duration of her upkeep program.”

Mr. Mitchard added: “Although we have set the bar high with the work undertaken on HMS Brocklesby, we have undoubtedly grown our expertise in supporting the Royal Navy’s minehunters and look forward to replicating our work with HMS Quorn later this year.”

Lieutenant Commander Maryla Ingham, HMS Brocklesby’s Commanding Officer, said: “I would like to extend my thanks to all enterprise partners who contributed to HMS Brocklesby’s refit including BAE Systems, Portsmouth Flotilla (PORFLOT) and of course my own team. We are now back at sea and conducting trials and look forward to our return to full operational capability.”

HMS Quorn was moved into the Minor War Vessels Center of Specialization in December 2016 and is due to begin her major upkeep program later this year.

In total, BAE Systems staff have spent around 190,000 hours carrying out a total of 9,000 maintenance tasks on the 600-tonne ship.

The Royal Navy’s fleet of 13 Hunt Class MCMVs was built between 1979 and 1988 at shipyards in Southampton and Scotland. Eight remain in service with the Royal Navy, while the Hellenic Navy and Lithuanian Navy have two each. HMS Brecon, the remaining Hunt Class MCMV, is used for training.

The work is part of the Maritime Services Delivery Framework (MSDF) contract, awarded to BAE Systems in 2014, to support half of the Royal Navy’s surface fleet on U.K. and global operations, as well as the management of the Naval Base.