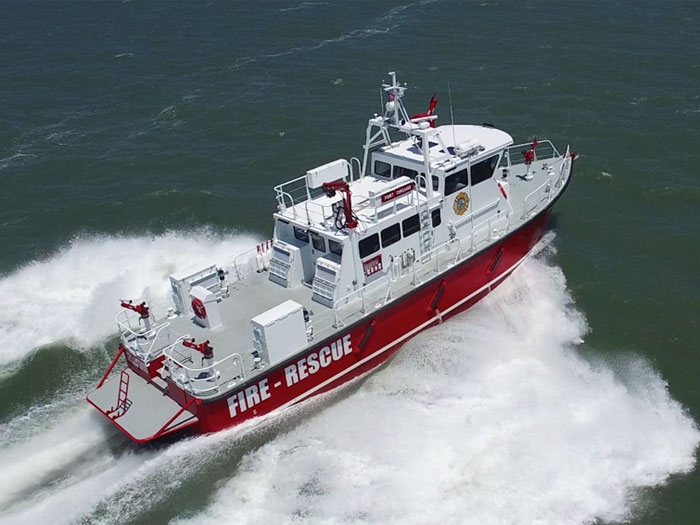 JULY 6, 2015 — The U.S. Army’s US Military Surface Deployment Distribution Command (SDDC) 596th Transportation Brigade has accepted delivery of a Fast Response Fire-Fighting Vessel under a contract for design and construction of the vessel placed with New Orleans, LA, based Technology Associates, Inc. (TAI). It was fabricated at subcontractor Aluma Marine in Harvey, LA.

“This vessel design and build program was delivered ahead of schedule and with zero change orders,” said Anil Raj, President of TAI. “The successful project performance resulted from the partnership spirit with which the Army and TAI jointly managed and implemented the project. The fabrication yard, Aluma Marine and the craftsmen who worked with and supported TAI personnel at the facility are to be commended. We are happy that the Army received a custom craft suiting all of its requirements, and that the Army is pleased with the craft’s performance, as well as the logistics support and the crew training provided under the contract.”

Designed to meet the primary mission of fire protection of the Military Ocean Terminal Concord (MOTCO) in Concord, CA, the vessel will ensure continued safety of the MOTCO facilities and those of local cities and towns.

The fire pumps supply 10,000 gallons per minute of water to four fire monitors and five fire hydrants. There are also three manifolds to supply water to hoses to fight fires on an affected platform or on shore.

The fire monitors are capable of reaching fires over 400 ft away and are remote and manually controlled. A remotely operated fire monitor, mounted on the pilot house top, can be viewed from an inside fire response station through two roof windows.

The vessel’s foam concentrate tanks are capable of deploying 1, 3, or 6% foam automatically while a deluge fire sprinkler system, when activated, covers the entire vessel’s exterior with water to prevent fires from flashing back.

The vessel also features a Forward Looking Infrared (FLIR) system which helps with identifying and targeting the seat of a fire, and with high speed navigation at night or in fog.

On board facilities include a treatment room where emergency treatment can be administered to disaster victims.

The vessel has spaces for all fire response gear and Self Contained Breathing Apparatuses (SCBA), a galley, mess, sleeping accommodations for four, and a head to allow extended fire response duties.