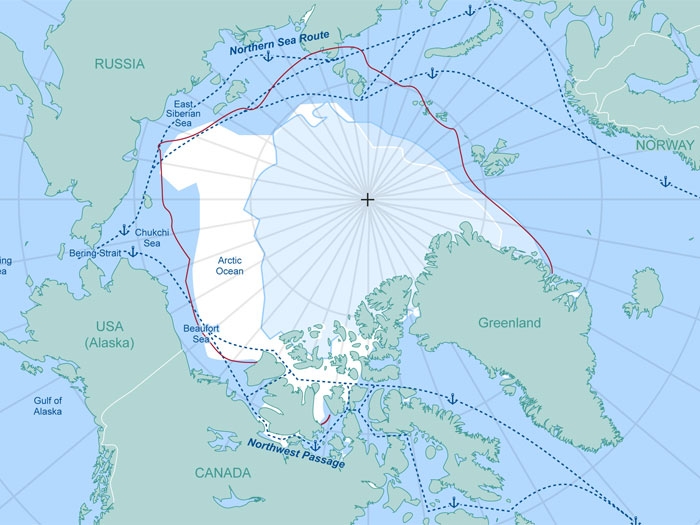 APRIL 22, 2014 — Decreasing seasonal sea ice has opened up Arctic waters for longer periods with resulting potential economic opportunities in commercial shipping, cruises, commercial fishing, oil, and mining. But while Russians seem to find all this very exciting, with commercial vessels now using the Northern Sea Route with some regularity, across the Bering Strait in the U.S., interest in developing and investing in Arctic maritime infrastructure is more cautious.

A recently released GAO report notes that the Northern Sea Route has relatively less sea ice than along the Northwest Passage, and the geography and shallow depths of the Northwest Passage make it less viable for trans-Arctic shipping. There is also a lack of U.S. trade lanes that would provide sufficiently shorter sailing distances to make an Arctic route relevant.

The report, “Maritime Infrastructure: Key Issues Related to Commercial Activity in the U.S. Arctic over the Next Decade,” finds that commercial U.S. Arctic maritime activities are expected to be limited for the next 10 years.

Interviews with industry representatives highlighted a variety of general challenges related to operating in the Arctic, such as geography, extreme weather, and hard-to-predict ice floes. Industry-specific factors were also cited as contributing to limited commercial activity.

For example, shipping companies noted higher costs with Arctic transit; cruise industry groups noted a lack of demand for Arctic cruises from the mainstream cruise-consumer base, and oil companies last drilled offshore exploratory wells in the U.S. Arctic in 2012.

GAO says that although the activity will likely be limited, federal, state, and local stakeholders have taken some actions to plan for future maritime-infrastructure investments. Some of these actions address factors that, as identified by industry representatives, contribute to the current and expected limited maritime activity in the U.S. Arctic.

For example, the U.S. Army Corps of Engineers (USACE), in collaboration with the State of Alaska, has taken steps to study the development of an Arctic deepwater port; the lack of which is a factor identified by mining representatives as contributing to the expected limited mining activity in the U.S. Arctic. The U.S. Coast Guard (USCG) is in the preliminary phase of seeking to acquire a new polar icebreaker, which could be used for emergency response, research assistance, or patrols. The National Oceanic and Atmospheric Administration (NOAA) and the Alaska government are working to improve mapping, charting, and weather information for the U.S. Arctic.

The Committee on the Marine Transportation System (CMTS) published the U.S. Arctic Marine Transportation System: Overview and Priorities for Action in July 2013, which prioritized actions for developing Arctic maritime infrastructure and identified the lead agency for each action. This report prioritized two broad categories to be addressed in the near term: information infrastructure, such as mapping and charting, and response services, such as search and rescue. Implementation of the report’s actions is at the discretion of each federal agency; however, according to CMTS officials, CMTS is currently developing a process to regularly monitor agencies’ progress in addressing the recommended actions.