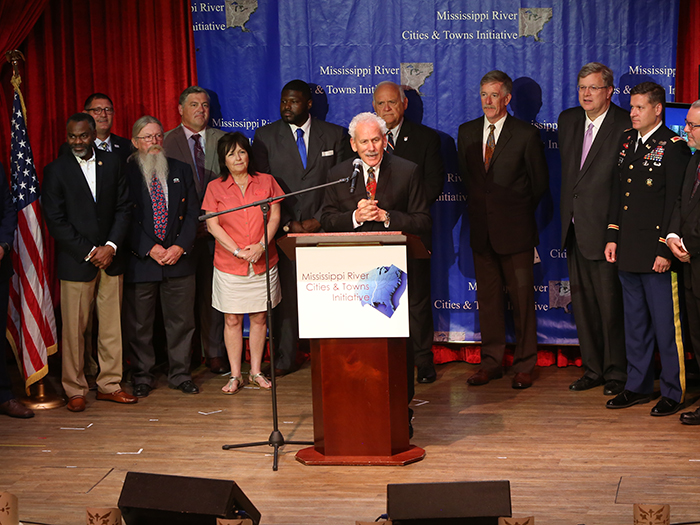 “We are thrilled to introduce the USGS Mobile Super Gage on our flagship vessel and look forward to keeping the waters in which we travel clean for many future generations to come,” said John Waggoner, founder and CEO of American Queen Steamboat Company, at today’s ceremony.

A data-gathering nutrient sensor attached to the American Queen steamboat will, for the first time, allow scientists and cities to better understand the water quality along the entire length of the Mississippi River.

In 2018, the mayors signed an agreement with the U.S. Geological Survey, the Corps of Engineers, and the U.S. Department of Transportation to deploy nutrient sensors on private vessels transiting the Mississippi River between New Orleans and St. Paul, moving closer than ever before to a real-time nutrient monitoring net for the nation’s most important waterway.

“We as mayors along the Mississippi River, see nutrient loading as the greatest threat to our water security. But, in order to manage this threat, we must be able to measure it. We have to be able tell if the hundreds of millions of tax dollars going into conservation work along the River or Corps ecosystem restoration work is having an impact and if not where by how much,” said Frank Klipsch, Mayor of Davenport, Iowa and Co-Chair of MRCTI.

“It’s hard to overestimate how critical fresh water is to the Memphis economy,” said Memphis Mayor Jim Strickland. “Each year the river draws hundreds of thousands of visitors to our city contributing millions to our local economy. Because of this, we created the Fresh Water Institute to ensure that our drinking water is safe and that our aquifer is viable for years to come.”

West Memphis Mayor, Marco McClendon said: “The tourism industry within the Mississippi River region of Arkansas provides over 22,000 jobs and is a $2.4 billion industry. But, no one wants to hunt, fish, paddle, or cruise in or near water full of algae due to nutrient surge. So, we need to know what is in our water where to keep it clean and that’s what the sensors we’re deploying will do.”

American Queen Steamboat will be the first private carrier of the USGS sensors which will allow for data collection as the company’s flagship vessel, the American Queen, travels up and down the river on its itineraries.

“As the long-standing leader in Mississippi River cruising, we are dedicated to the sustainable health of not just the river, but the communities that rely on it,” said John Waggoner, founder and CEO of American Queen Steamboat Company. “Along with our partners, we are thrilled to introduce the USGS Mobile Super Gage on our flagship vessel and look forward to keeping the waters in which we travel clean for many future generations to come.”

The U.S. Geological Survey will own, operate, and maintain the nutrient sensors.