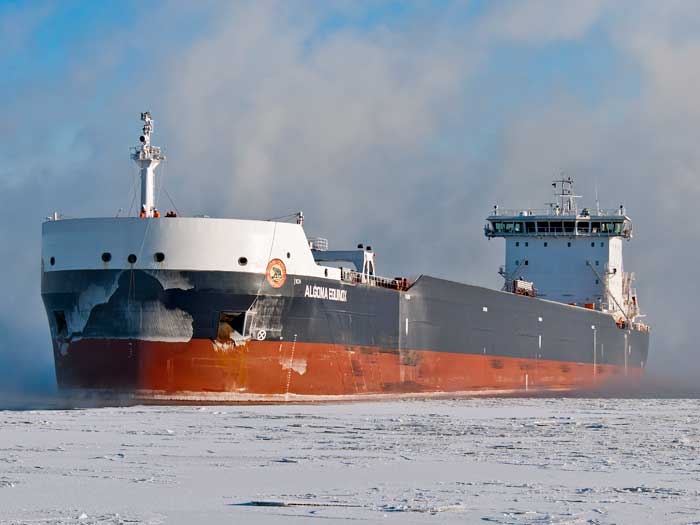 DECEMBER 13, 2013 — Algoma Central Corporation’s brand new ship – the Algoma Equinox – made her way into the Port of Duluth-Superior on Wednesday to load iron ore for Cleveland Cliffs at the BNSF Railway Dock in Superior. This marked the ship’s first full transit of the entire Great Lakes-St. Lawrence Seaway since arriving in the system last week.

The gearless bulker is the first in a series of eight  Equinox Class next generation Great Lakes -Seaway vessels being built at China’s Nantong Mingde shipyard. Algoma will own six of the series, including two gearless bulkers and four self-unloading vessels. CWB, formerly the Canadian Wheat Board, will own the other two gearless bulkers, which will be operated and managed by Algoma.

Delivery of the remaining vessels in the series is scheduled at approximately three month intervals through 2014-2015.

Algoma says its $300 million investment in its six Equinox vessels demonstrates tit commitment to operating in a sustainable manner. The ships have been designed to optimize fuel efficiency and operating performance thus minimizing environmental impact.

A 45% improvement in energy efficiency over Algoma’s current fleet average is expected, resulting from the use of a modern Tier II compliant engine, increased cargo capacity, and improved hull form. In addition, a fully-integrated IMO approved exhaust gas scrubber will remove 97% of all sulfur oxides from shipboard emissions. The use of exhaust gas scrubbers marks the first application of an IMO-approved integrated scrubber on a Great Lakes-St. Lawrence vessel class.

The Algoma Equinox departed the shipbuilder on Oct. 1, transiting 14,700 nautical miles over the course of 61 days. After making her way through the Panama Canal in mid-November, the vessel arrived in Canada for its first load iron ore from ArcelorMittal Mining Canada in Port Cartier, Quebec, on Dec. 1. The ship departed the following day en route to Hamilton, with her first official cargo to unload at the ArcelorMittal Dofasco dock – officially entering the Seaway for the first time at the St. Lambert Lock in Montreal on Dec. 3. The iron ore pellets loaded at BNSF in Superior are headed to Quebec City. The Algoma Equinox arrived in the Port of Duluth-Superior under the command of Captain Seann O’Donoughue (though it was Captain Prakash Rao at her helm during the voyage from China to Canada).