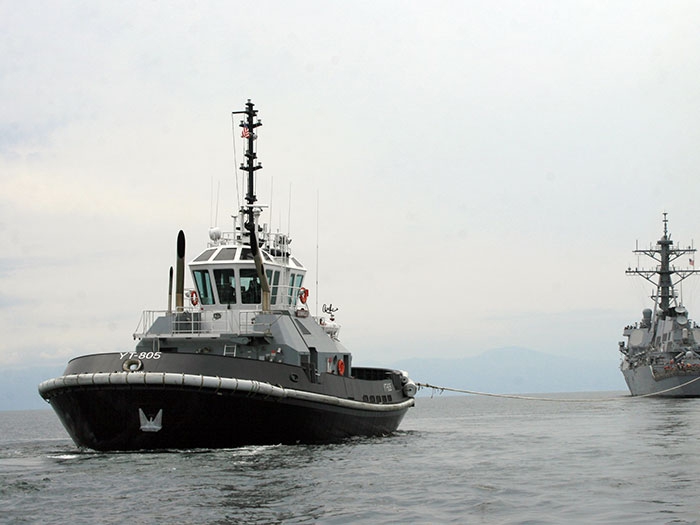 OCTOBER 10, 2018 — Robert Allan Ltd. has been awarded a contract to design a new version of its successful Z-Tech 4500 tugs for the United States Navy. The Navy already has six vessels of this design, known as the YT 802 Class, in service. This first group were delivered between 2009-2012 and are in use in the Pacific Northwest and Japanese waters.

Four new tugs (with an option for two more) will be built in Anacortes, WA, by shipbuilder Dakota Creek Industries Inc. under a contract worth potentially $84.5 million if both options are exercised (see earlier story).

The hull form for the new vessels will be essentially identical to previous versions of this Class of vessels, but with deckhouse changes to suit new EPA Tier IV engines, which require significantly larger exhaust emission systems.

Changes to the fendering system will incorporate feedback from operators on the existing vessels.

The tugs will perform ship-handling duties for the full range of Navy surface warships, barges, and submarines. For the latter duties the tugs are equipped with an extensive array of underwater fendering, as well as the typical fenders for surface ships.

At least one of the new vessels will be assigned to a US East Coast Naval base which is the first use of this design with the Atlantic Fleet.

The new tugs will have the following particulars:

The tugs are configured essentially as “day-boats” but also provide accommodations for a crew of up to six persons.

One of the unique features of the layout is the complete separation of the accommodation deckhouse from the machinery casing, a configuration designed to both provide a reasonably dry access to the accommodation spaces in the notoriously damp northwest climate, as well as provide a significant degree of noise attenuation in the crew spaces.

These tugs are equipped with a telescoping gangway, or brow, stowed across the aft end of the deckhouse. This is used to transfer personnel to other ships alongside or down to submarines.

Construction of the first of this new series of tugs is expected to commence early in 2019.