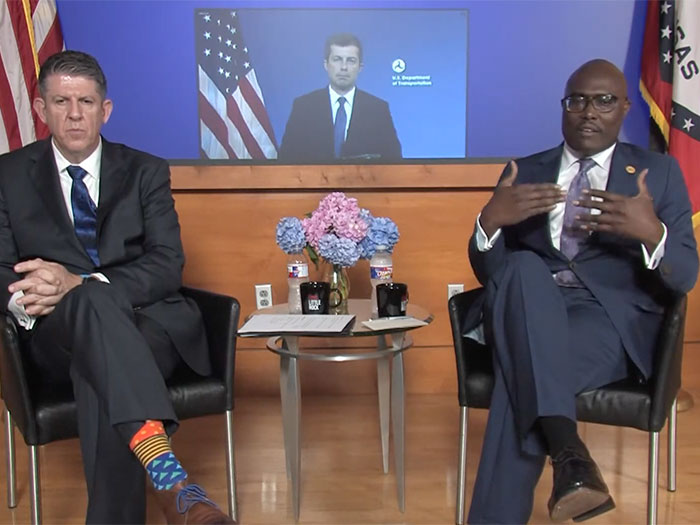 The event was convened for the port at the Little Rock Regional Chamber of Commerce at the request of Arkansas State Senator Clarke Tucker.

During the event, the panel discussed the importance of American infrastructure projects, as well as the role of the McClellan-Kerr Navigation System in stimulating economic growth in the Arkansas-Oklahoma region.

Arkansas Gov, Asa Hutchinson delivered the event’s opening remarks, highlighting both the history and importance of the MKARNS. “It’s a great asset to Arkansas and the multi-state area,” said Hutchinson. “And the Little Rock Port Authority plays a key part in managing the most beautiful and important aspects of this navigation system.”

In the discussion that followed, panelists discussed the economic impact of the McClellan-Kerr Navigation System, as well as the future of infrastructure in Arkansas and beyond.

“When the MKARNS was built 50 years ago, Congress appropriated the project a little over a billion dollars,” said Bryan Day, executive director of the Little Rock Port Authority. “Today, that billion-dollar investment from 50 years ago equates to 1.5 billion dollars worth of return to central Arkansas every three to five years.”

Looking forward, Little Rock Mayor Frank Scott Jr. emphasized the need to continue working with local communities to garner public support for future infrastructure projects. “Many people take [our infrastructure] for granted,” said Scott. “We have to demonstrate and show—not tell—how it impacts all people.”

“Fifty years ago, people made a bet that investing in infrastructure would open up new economic possibilities for an entire region for decades to come. And that’s what we’ve seen,” said Buttigieg. “To this day, in a world that has changed so much, we are still reaping the benefits from that forward-thinking. And that’s one of the reasons why we believe that now is the moment to begin thinking about the investments that are going to be paying off for the next 50 years.”