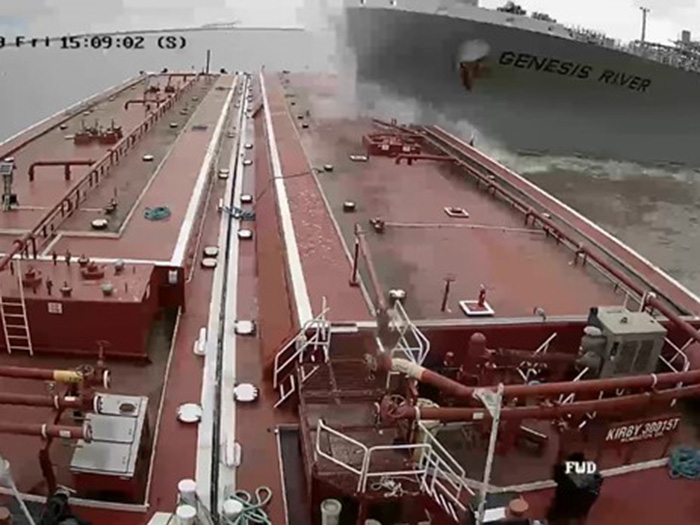 The National Transportation Safety Board (NTSB) has issued its report on the May 10, 2019, incident in which the LPG carrier Genesis River collided with a 297 foot long tank barge being pushed ahead by the 69 foot long Kirby Inland Marine towing vessel Voyager.

Vessel speed was a factor in the collision, the National Transportation Safety Board said Tuesday.

The Houston Ship Channel was closed to navigation for two days during response operations and did not fully open for navigation until May 15. The total cost of damages to the Genesis River and the barges was estimated at $3.2 million. The cost of reformate containment and cleanup operations totaled $12.3 million.

In Marine Accident Report 21/01, the NTSB says the pilot’s decision to transit the wide-beam, deep-draft Genesis River in “navigation full” mode at “sea speed” subjected the vessel to greater hydrodynamic forces than had it been traveling at slower maneuvering speeds through the shallow and narrow lower Houston Ship Channel.

Sea speed is the maximum efficient speed of a vessel, but it is generally used in open oceans because the propulsion engine mode required for this setting limits the ability to change speeds in an emergency. The maneuvering limitations imposed by operating at sea speed prevented a rapid increase in engine speed when needed to improve rudder effectiveness. Transiting the channel at sea speed, investigators said, “left little margin for error and introduced unnecessary risk.”

“Operating at sea speed reduces the ability to maneuver out of a dangerous situation,” said NTSB Chairman Robert L. Sumwalt. “This is especially true in the Houston Ship Channel, a challenging waterway with a long history of accidents.”