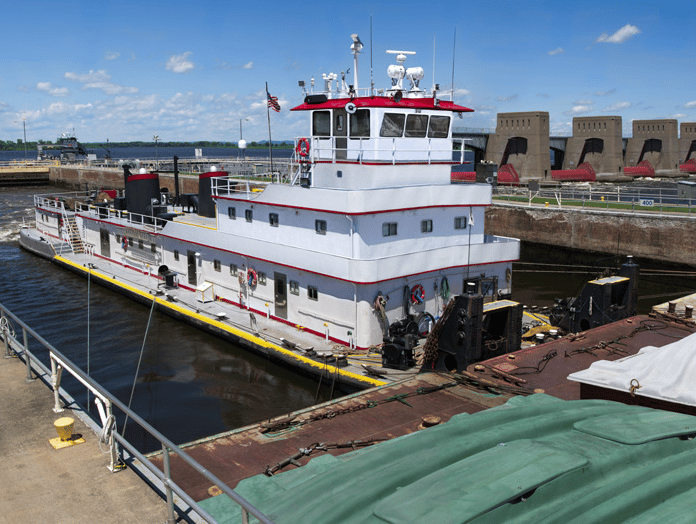 With towboats holding up to 110,000 gallons of diesel fuel, rising costs are passed to the towboat operator company, the shipper, the farmer, etc. (Credit: Shutterstock/Earl D. Walker)

Anyone who’s shopped for groceries, dined at restaurants, paid rent or pretty much purchased anything these past months knows we are facing economic challenges unprecedented to many of us. Surging prices for everything hurled inflation to a new four-decade peak in June. According to Moody’s Analytics, it’s costing the average American household an additional $327/month, totaling $4,000/year. Consumer prices have soared 9.1 percent compared with last year, the largest 12-month increase since 1981, according to the U.S. Department of Labor.

The ink of the Infrastructure Investment and Jobs Act (IIJA) was barely dry before this crisis hit us all in the wallet. And where has it been most apparent this summer? At the pump. Surging gasoline prices started in April and peaked (we hope) in June, where gasoline costs rose nearly 60 percent compared to June 2021.

International crude prices have doubled since the end of last year. There are myriad causes—Russia’s invasion of Ukraine and the responding sanctions by the U.S. and others, and America’s reduced refining capacity, to name some. Our capacity to convert oil to gasoline is down 900,000 barrels per day since the end of 2019, according to the Department of Energy. Shuttered refineries can’t reopen overnight. And increased energy consumption heightened with people returning to travel as we leave COVID in the rear-view mirror.

Inland waterways aren’t immune to these economic challenges. For the transportation sector, increases in fuel costs are spread throughout the supply chain. In a CNBC Special, Inflation USA from May 28, Mike Ellis, CEO of American Commercial Barge Line, said that up to 30% of his company’s costs is fuel. “When our fuel costs double, our prices have to go up.” Towboats have a unique relationship with fuel compared to other modes. Sure, diesel fuel powers these boats, but fuel is also a necessary part of balancing a towboat. The weight of fuel is crucial for ballast, and its distribution aids in overall efficiency.

With towboats holding up to 110,000 gallons of diesel fuel, rising costs are passed to the towboat operator company, the shipper, the farmer, the refiner, the consumer, and even the federal agency responsible for modernizing the system to become more efficient and competitive. And the products have to move, as Ellis pointed out later in the CNBC special, saying, “If we don’t move, America doesn’t move.” Rising fuel costs are only one contributing factor to why this year’s dollars won’t go as far as last year’s dollars.

Looking back at IIJA, that was a huge win in large part because it funded so many projects to completion—or so we thought, under normal circumstances. Now the completion of these projects is certainly going to be impacted by price increases of all sorts. Metallurgic coal and steel particularly are threatening the efficacy of not just IIJA funding but could impact annual appropriations dollars from Congress and even the Inland Waterways Trust Fund.

For example, at April’s Inland Waterways Users Board meeting (the first in more than a year, thanks to a zero-based moratorium on advisory committees under purview of the Department of Defense), the Kentucky Lock project will require an additional $332 million in construction funding, bringing the project’s total cost to $1.5 billion and extending its completion date by several years. To put that into perspective, Kentucky Lock was authorized in the Water Resources Development Act of 1996 for a total cost of $393.2 million. It’s unknown whether other projects will face the same fate.

But there’s hope. New lock chambers through IIJA construction will improve the system with 1,200-foot locks, further leveraging barge transportation as the most fuel-efficient mode of surface transportation. The industry will continue to improve as responsible stewards of the environment and a reliable component of the supply chain. And as always, the resiliency of the industry will prevail through these unprecedented challenges.