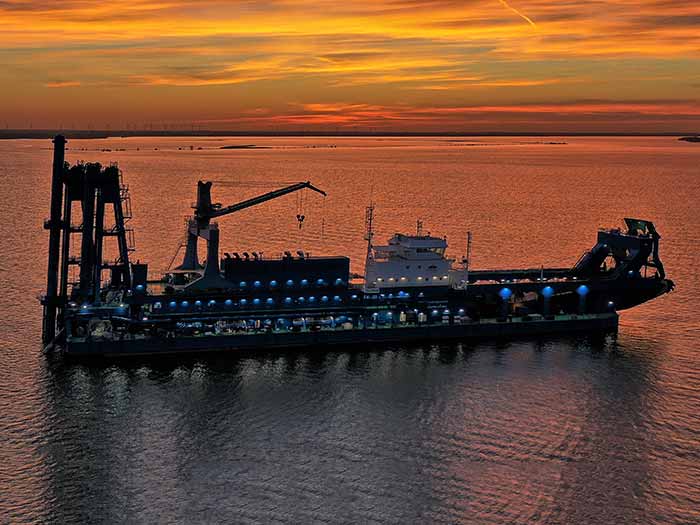 The latest addition to the Suez Canal dredge fleet, the Mohab Mamish, was set to arrive at Port Said on board the heavy load carrier Xiang Rui Kou this evening. It is planned to join the Suez Canal north convoy tomorrow and will be unloaded in the Great Bitter Lakes.

The Mohab Mamish is one of the world’s most powerful cutter suction dredges. It was officially handed over to the Suez Canal Authority by shipbuilder Royal IHC on March 18 after successfully completing commissioning tests in the Netherlands.

The 29,190 kW heavy-duty rock CSD has an overall length of 147.4 meters and a total installed cutter power of 4,800 kW. It can dredge to a depth of 35 meters. There are also accommodation facilities on board that can house over 70 people.

The dredge will primarily be deployed to maintain and improve the Suez Canal. As the vessel was designed in close cooperation with SCA, it has the capacity to work effectively in the harsh conditions of the region.

In a statement issued subsequent to the Ever Given grounding, Admiral Osama Rabie, Chairman and Managing Director of the Suez Canal Authority (SCA), called the refloating of the giant containership “a unique model of crisis management by the SCA which utilized dredging, for the first time in maritime salvage operations.”

Admiral Rabie noted that ongoing Canal development projects include establishing a number of large new waiting areas on the New Suez Canal in addition to deepening and maintaining those existing on the original Canal to increase the waterway’s ability to deal with any possible emergency.

He added that in the coming period, the SCA aims to enhance its maritime salvage capabilities by acquiring a number of new large tugboats of high bollard pull capacity.