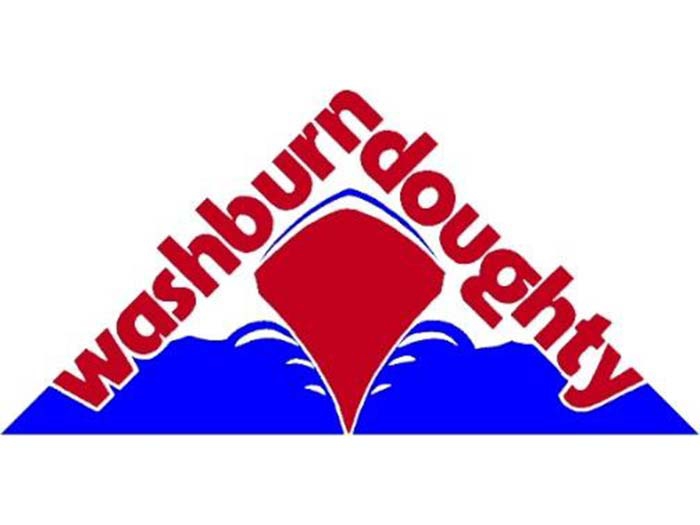 The 93′ x 38′ hull is a proven design with 18 tugs in operation and four under construction. The vessels will be built as harbor assist vessels as defined in USCG Subchapter M and admeasure less than 200 gross tons US regulatory tonnage.

Bruce Doughty, Chairman of the Washburn & Doughty Board, says, “We are proud to have earned Harbor Docking and Towing’s business and we look forward to working with them on this innovative project. Cat’s hybrid system is a great fit for our 93′ tug.”

Electric – Standby/Transit – The main thrusters are run via the attached thruster motors in variable speed mode. Electric Power is generated by a diesel electric power plant consisting of two Caterpillar C18’s, and one C7.1. Transit speed is variable up to 9 knots.

FiFi – Firefighting pump is powered from the front of starboard main engine PTO. Maneuvering is done with main thrusters operating in electric mode powered by generators.

The off-ship firefighting system will meet FIFI 1 requirements relating to water output. It will utilize one clutched FFS model SFP 300 x 400CW-NCI pump driven by the starboard main engine. Two FFS 1200 remote controlled fire monitors shall be mounted on the aft end of the 01 deck. They will be controlled by the FFS control panel in the pilot house. A deluge system will be supplied to cover the tug with water spray.

A Markey DEPCF-52-75HP electric hawser winch with level wind will be installed on the fore deck. Controls will be located in the pilothouse, with an emergency brake release/brake hold button located on the forward deckhouse bulkhead.

A Palfinger PTM200, or equal, marine crane will be installed on the main deck built into the aft corner of the port stack. The crane has a telescoping boom with full extended length of 30 feet. Lifting capacity is 4000 lb at a 30 foot radius. A boom support will be fitted to the starboard stack for storage.

Bow fendering will consist of two upper rows of 24″ cylindrical fender, a middle 16″ soft loop fender, and a lower laminated fender. Twelve inch black rubber “D” fender will be fitted at the main deck on the sides and around the stern. Between the D fender and the middle bow fender will be a double row of soft loop fender, with the aft end of the soft loop fender tapered to approximately the depth of the D fender.  Accommodations are available for six crew members in four staterooms. The joiner package will be completed by Senecal Construction of Brunswick, ME.