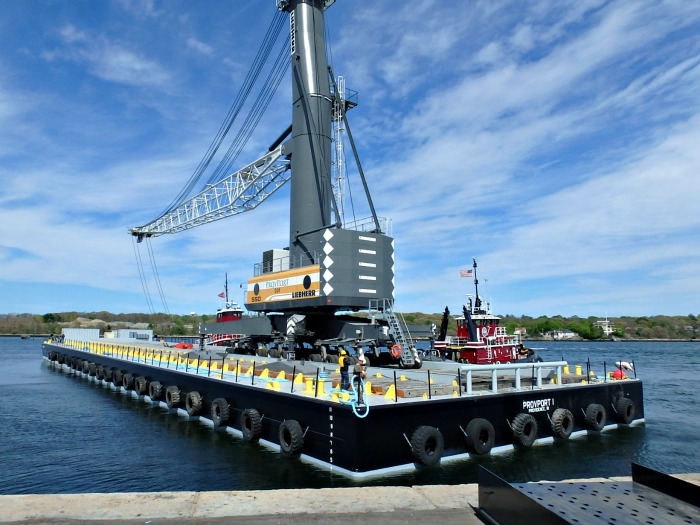 MAY 30, 2016—Conrad Shipyard, Amelia, LA, recently delivered a 300-foot long x 72-foot wide rake/box barge with a deck rating of over 6,000 pounds per square foot to ProvPort, Providence, RI, according to naval architect JMS Naval Architects, Mystic, CT. The crane barge design allows for the easy loading and unloading of cargo from ships to the dock or from ship to ship.

JMS Naval Architects, Mystic, CT, engineered and designed the crane barge for the State of Rhode Island that will be used for stevedoring operations at ProvPort Inc.

ProvPort is a nonprofit public-private partnership, formed in 1994, which owns and operates the municipal port of the City of Providence, RI. ProvPort is New England’s premier deep-water multimodal facility for international trade and domestic distribution and one of the busiest ports in America’s northeast.

JMS designed the barge to carry and operate the facility’s 440-ton Liebherr LHM 550 mobile harbor cranes. The barge is ABS classed A1 with notation “Deck Barge,” uninspected and unmanned. JMS also created the technical specification documents to utilize for the solicitation of shipyard bids and provided owner’s representative services during the construction of the barge at Conrad Industries.

The contract was funded by the State of Rhode Island’s Transportation Investments Generating Economic Recovery (TIGER) II grant program award managed by the Rhode Island Commerce Corporation. The grant was created by Congress in the 2010 Transportation Appropriations Act and allowed the purchase and installation of the barge and two high performance harbor cranes. The new stevedoring equipment will modernize and enhance the port’s ability to continue its existing bulk material operations while expanding its capabilities to accommodate container operations; thus alleviating demand on the Port of Boston—the only existing container port in New England. The new crane barge will be critical for the port which has relied on 30-year-old rented crane barges that have been prone to breakdowns and have been out service for prolonged periods. The crane barges are estimated to remove on average 1,000 trucks per week off the northeast corridor highway system—one of the most congested in the country.