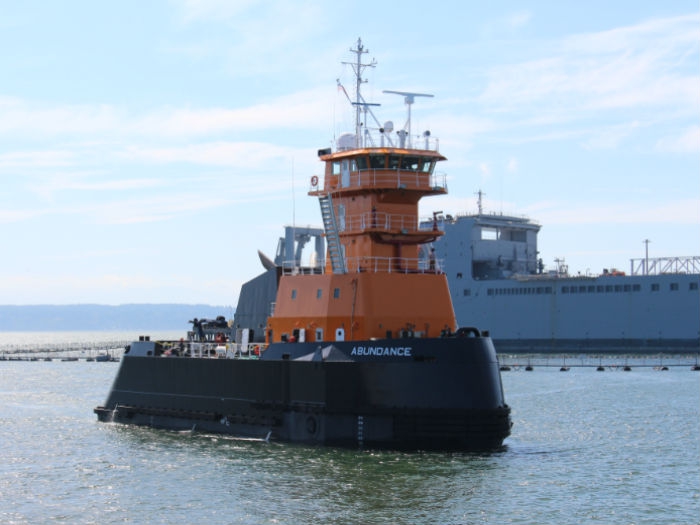 JULY 14, 2017—The ATB tug Abundance, the “power” behind the first complex liquefied ammonia transport barge built in the U.S. in decades, was recently delivered by Nichols Brothers Boat Builders, Whidbey Island, WA, to a subsidiary of The Savage Companies.

The M/V Abundance is the first of two 139 ft x 44 ft x 19 ft ATB tugboats being built by Nichols Brothers Boat Builders (NBBB) to support the operations of Tampa Port Services, LLC, a subsidiary of The Mosaic Company, the world’s leading producer and marketer of concentrated phosphate and potash.

As we reported previously, Vigor, Portland, OR, delivered The Harvest, the 508 ft x 96 ft anhydrous ammonia barge that will operate in the Gulf of Mexico and on the Mississippi River.

The Abundance is based on a design by Ocean Tug and Barge Engineering, Milford, MA, with production engineering by BMT Nigel Gee, Southampton UK, and engineering support by NBB. The tugs are ABS classed, including Maltese Cross A1-Towing service/AMS/ACCU/UWILD SOLAS compliant and meet USCG Subchapter I.

The hull is double-bottomed, and outfitted for long range ocean pushing/towing, firefighting and general-purpose vessel requirements.

The barge connection system is a hydraulic connecting pin system from Articouple. Significant effort was put forth by Nichols Brothers’ engineering team in regard to the ship’s complex mechanical and electrical systems.

New innovative concepts ascended during the design and construction of this ATB, which NBBB will continue to develop and implement into future newbuild projects.

In addition, NBBB says substantial planning and equipment development occurred in preparation for the vessel launch. The tug weighs over 1,400 long tons, and is was the heaviest, and largest draft vessel in the shipyard’s history over the last 50+ years. NBBB launch rig underwent upgrades including replacement of all hydraulic motors and planetary gears, and was outfitted with a 1,200 hp Hydraulic Power Unit. Center-Lift provided and installed 10 buoyancy bags to the vessels hull that provided nearly 200 tons of buoyancy.

General Construction supplied a 700-ton crane barge to lift the vessel and guide to deeper water. The vessel was moored in Holmes Harbor of Freeland, WA, before being towed to Nichols Brothers’ Langley facility for final outfitting, dock and sea trials. The vessel was delivered on June 30, and then transported to Portland OR, where it was coupled with the barge for unit sea trials.

NBBB also recently delivered a 120 ft twin-screw tug for Kirby Offshore Marine, with a second under construction at NBBB. Additionally, Nichols is building two 238 ft x 44 ft cruise ships with deliveries this summer and the spring of 2018.