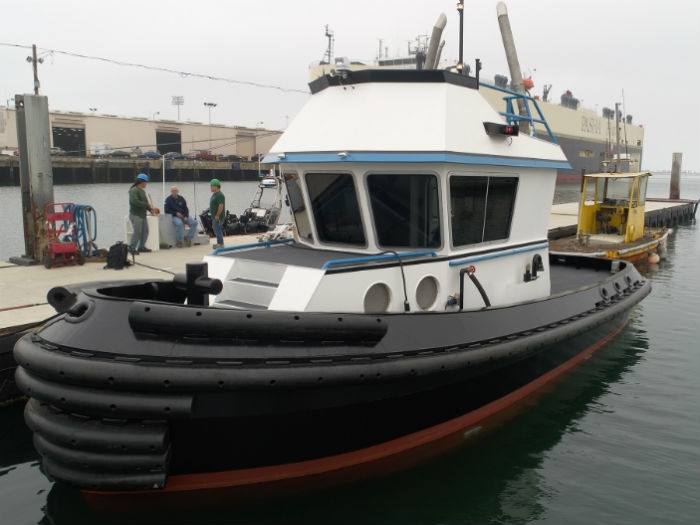 The name “Blue Fin” is very significant to NASSCO. In the 1940’s, when San Diego’s tuna industry was at its peak, NASSCO was one of the largest tuna boat manufacturers in the region. Today, bluefin tuna can be found directly off San Diego’s coastline, and are highly sought after by local fishermen.

The tug was built at MGBW’s new solar-powered construction facility in National City, CA—less than five miles from GD NASSCO. Besides moving vessels being built at the yard, the new tug will be used to deploy pollution containment booms. Work in the often-tight corners of a shipyard requires excellent visibility, so the designers have given the pilothouse a 300-degree unobstructed line of sight. In addition, a flying bridge, complete with communication and control consoles, is an integral part of the wheelhouse.

Propulsion for the Blue Fin is supplied by two Cummins QSL9M Tier 3 engines, each producing 410 horsepower. The engines drive 38- by 26-inch four-blade, bronze, workhorse-style props on 3-inch Aquamet 22 shafts. Each engine is linked to the shafts via a ZF325-1 gear with 2.97:1 ratio.

In addition to conventional rudders the tug is fitted with flanking rudders for enhanced maneuverability and handling.