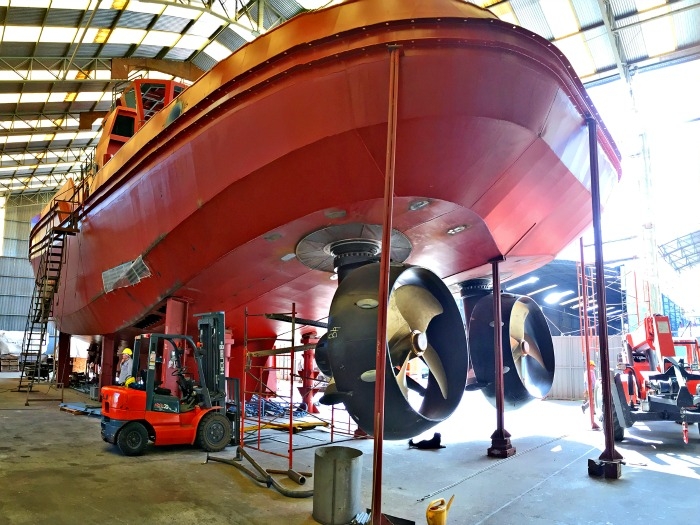 The new tug is fitted with two Rolls-Royce azimuthing thrusters

NOVEMBER 11, 2015—Built to an Argentine design in an Argentine yard, a new 28.8m x 10m azimuthing stern drive (ASD) tug will soon be at work handling ships in her home country. To be named Brutus, the vessel was designed by Ing. Emilio Noël and built by the Astilleros Unidelta S.A. of Buenos Aires. This shipyard, located on the Rio Lujan, in Tigre near Buenos Aires, is noted for building highly successful catamaran ferries and continues its innovation with the new tug.

The vessel’s 4.7 meter depth includes the two Rolls-Royce Azimuthing Thrusters, Type US 205/P20 FP. Each of these aft-mounted thrusters is powered by a 16-cylinder Cummins QSK60M diesel engine generating 2,700 hp (2,013 kW) at 1,900 rev/min. The hull form features a double chine that broadens aft to give a fine deadrise to the stern that will allow the tug to opérate efficiently in both Ahead and Astern modes.

With a design speed of 12-knots, the 5,400 hp tug will deliver a 65-ton bollard pull. Installed on the tug’s fore deck is a combination Rolls-Royce Hydraulic Towing and anchor winch. On its aft deck there is a Mapawey Quick Release Disc-type Towing hook, Type DCX50/65 with a 65-ton release load. Other aft-deck equipment includes a three-ton capstan.

The tug Brutus will be take advantage of a flexible design to work both as a harbor and ship assist tug as well as doing coastal towing.