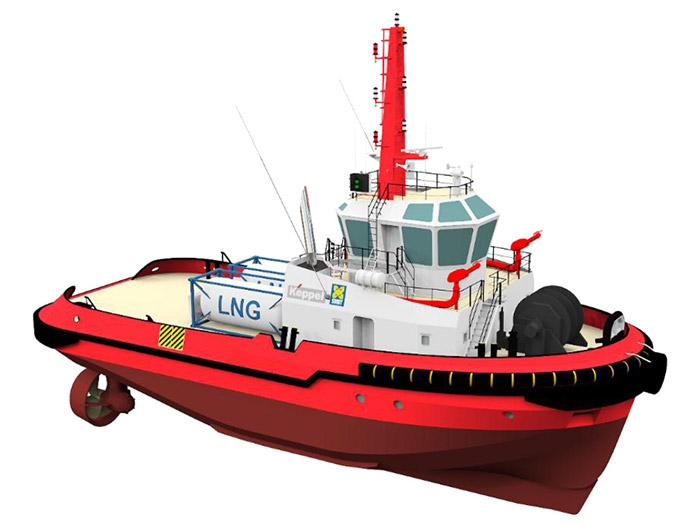 Built for Maju Maritime (which is merged operationally with Keppel Smit Towage) and named Maju Loyalty, the ASD tug was completed on time, within budget and with a perfect safety record.

Mr. Abu Bakar, Managing Director (Gas & Specialized vessels) of Keppel O&M, said, “Leveraging our newbuild experience and capabilities in LNG, we were able to ensure the smooth execution and timely delivery of this project. This is the second dual-fuel tug built by Keppel O&M, and furthers our track record in the design and construction of cost and energy efficient LNG-fuelled vessels. The award-winning tug design is part of a suite of solutions that Keppel O&M can provide as the industry increasingly adopts LNG as a marine fuel.”

Built to Keppel’s proprietary design, both tugs offer economical operations, efficient fuel consumption, a simplified bunkering process, and smart designs that enhance safety and comfort. The Maritime and Port Authority of Singapore had provided co-funding of up to S$2 million for each tug as part of its LNG Bunkering Pilot Program (LBPP) grant.

Mr. Romi Kaushal, Managing Director of Maju Maritime and Keppel Smit Towage added, “This dual-fuel tug is a welcome addition to our fleet of tugboats as we look to do our part in reducing carbon dioxide and sulfur oxide emissions. It is a step in the right direction as the industry adjusts to the International Maritime Organization’s global cap of 0.5% on the sulfur content of marine fuel. This project is a testament to Keppel’s innovation and reliability, and we look forward to furthering this partnership.”

The dual fuel tug is equipped with containerized, type-C ISO-certified LNG tanks on the main deck, as well as a patented LNG vaporizer which is compact and cost-effective. Refueling of the LNG tanks can be done by truck to ship operations or by replacing the empty tanks with replenished ones.

FueLNG, a joint venture between Keppel O&M and Shell Eastern Petroleum (Pte) Ltd., will be providing the LNG bunkering services for Maju Loyalty, while Shell will be supplying the LNG fuel.

Maju Maritime Pte Ltd and Keppel Smit Towage Pte Ltd are joint ventures between Keppel and Royal Boskalis Westminster N.V. (Boskalis) that provide harbor assistance, marine support and coastal towage services. The two companies have a combined fleet of over 70 vessels, which range from 3,000 to 5,600 bhp.