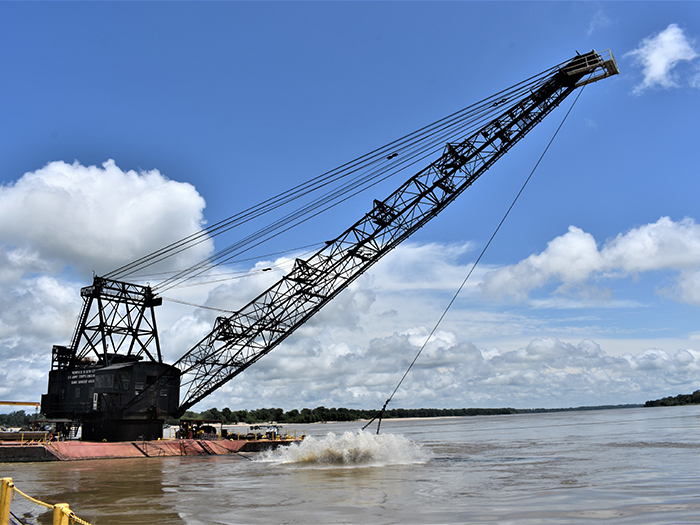 Memphis Engineer District Commander Col. Zachary Miller recently visited Island 68, a project site in Arkansas, where he met with the district’s Bank Grading Unit and reviewed progress made at the site thus far.

According to Project Manager and River/Civil Engineer Cole Stonebrook, the USACE has done work here before as this area is particularly erosive and scours easily in moving water.

“The soils in the area are very unstable and highly erosive,” Stonebrook said. “We are addressing a large bank failure by grading irregularities in the bank alignment to a smooth straight alignment. The Grading Unit is grading the banks to a one on four slope, which requires moving 220,000 cubic yards of material.”

Bank grading, according to USACE is “kind of like getting a gravel road ready to be paved.” The Bank Grading Unit moves in to prepare the river bank to the design grade and elevation needed to contain and hold concrete mattress and upper bank paving.

Concrete mattress is what keeps the river from meandering and creating its own path, which is what the Mississippi River has done in years past.

The equipment used to “grade” the river bank is a vintage 1949 barge-mounted Bucyrus-Erie dragline with a 183 foot boom and a 15 cubic yard bucket. Additional earthmoving capacity is provided by bulldozers.

Stonebrook said this specific project is 2,900 feet long and will be completed with a budget of $9.4 million. In addition to this location, he said there are four other locations in the Memphis area of responsibility where the Mat Sinking Unit will be placing concrete mattress this year.

“We work closely with navigation industry to address problem reaches in our district,” Stonebrook said. “If this bank failure in the revetment was left alone, it would continue to grow due to the swift velocities in the reach, and the channel alignment would become a major hazard to navigation. We also work closely with the landowners in the area and environmental agencies to obtain all clearances needed before construction begins.”

Construction in the area is not easy. Challenges include sandy soils, a tight bend in the river, and significant river traffic in the staging area.

“Working in a tight bend is challenging because each time a towboat passes the construction site, the unit holds to halt work and break down,” Project Manager Andrew Smothers explained. “Therefore, production rates can be lower during high traffic times, which is what we are experiencing to a certain degree. But, at the same time, our crews are doing everything they can to stay on track and if anything, deliver and complete this project ahead of time, despite the many challenges we face.”

The U.S. Army Corps of Engineers has been completing revetment operations since the 1800’s, but started using the current method of revetment in the 1940’s.

How long it will take to complete construction on the river system?

“The Mississippi River and Tributaries construction project is 95 percent complete but will take at least 20 more years to complete,” Smothers said. “After that, we will still perform maintenance regularly.”

The Bank Grading Unit operated by the Memphis District is essential to this work, to say the least. Without it, keeping the Mississippi River commerce alive and well wouldn’t be possible at the current level.

The Memphis District is slated to work at 28 sites along 1,000 miles of the Mississippi River this year with plans to clear 70,000 feet of bank. 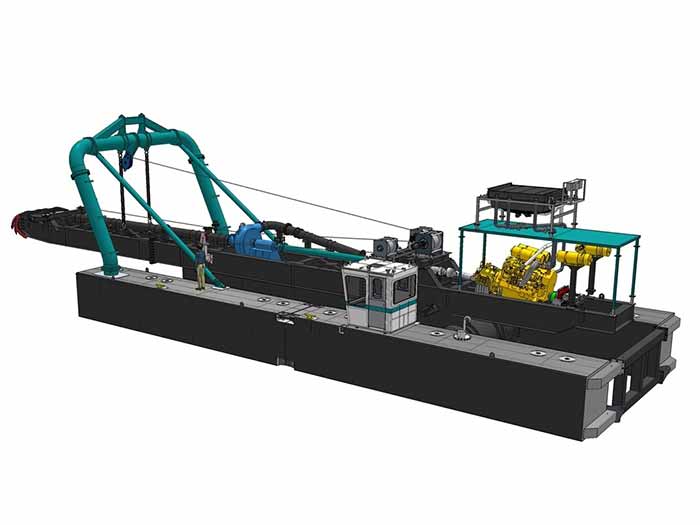