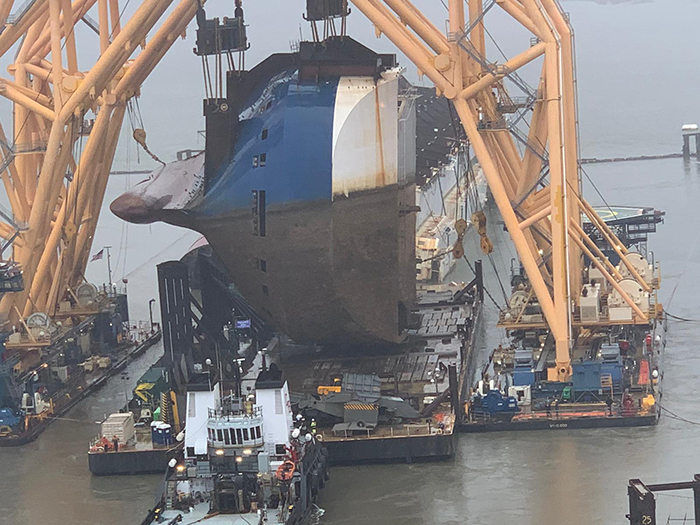 The barge Julie B transits underneath Section One of the Golden Ray wreck. Response engineers accounted for approximately 6,000 metric tons of load which includes the dry weight and projected sediment contained within the section during the lift. [St. Simons Sound Incident Response photo]

The St. Simons Sound Response Unified Command (the Coast Guard, Georgia Department of Natural Resources, and Gallagher Marine Systems) has taken a big step forward in its efforts to dismantle the wreck of the capsized car carrier Golden Ray and remove it safely, section by section.

By Saturday, the twin gantry heavy lift catamaran VEB 10000 had finished cutting and lifting Section One (the bow) of the wreck and responders were making preparations for the section to exit the Environmental Protection Barrier (EPB) that surrounds the site on the barge Julie B.

By Sunday, the Unified Command had released B-roll video showing Section One on its way secured to the Julie B, en route to a local site for further sea fastening, the process of securing a vessel for transit at sea.

The barge is equipped with pollution mitigation and self-containment capabilities.

“This is our first major milestone in the removal operation. We validated the overall removal method while we continue to refine our strategies to increase the efficiency of the next six cuts,” said Commander Efren Lopez, U.S. Coast Guard Federal On-Scene Coordinator. “Responders on the shore and on the water have vigilantly kept watch for and responded to any environmental impacts. We encourage the public to continue reporting any debris they encounter through the Debris Reporting Hotline and online form.”

Preparations for the second cut have begun. The wreck will be removed in a total of eight sections.