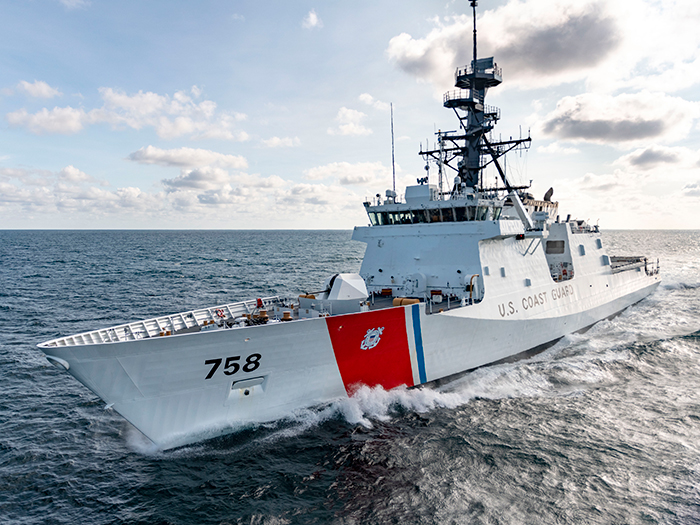 The ship spent three days in the Gulf of Mexico testing propulsion and auxiliary equipment, as well as various shipboard systems.

“Every successful sea trial is a major accomplishment for our shipbuilders, but this set proved to be a particularly substantial undertaking,” said Jay Boyd, Ingalls’ NSC program manager. “Since the year began, our team has persevered through every challenge. Learning through each obstacle presented by the COVID-19 pandemic, the NSC team has worked tirelessly to ensure the Coast Guard receives another high performance cutter to help protect our nation.”

In the weeks preceding NSC 9 builder’s trials, safety precautions were put in place to minimize the potential risk of COVID-19 to participants while at sea. The number of shipboard riders was reduced by one-third to allow for adequate social distancing. Those allowed onboard were tested for COVID-19 one week prior to sailing, and were screened the morning of departure.

Masks were required at all times, food services were staggered, and in addition to the cutter’s regular cleaning regimen, each individual received their own personal supplies to clean their way in and out of spaces onboard the ship.

Ingalls has delivered eight Legend-class NSCs with two more under construction, and one additional under contract. Stone (WMSL 758), the ninth NSC, is scheduled for delivery later this year.

NSC 9 was named to honor Coast Guard officer Commander Elmer “Archie” Fowler Stone, Coast Guard aviator number one, who made history in 1919 for being one of two Coast Guard pilots in the four man air crew who completed the first transatlantic flight in a Navy seaplane.

The Legend-class NSC is the largest, most technologically advanced ship in the Coast Guard’s fleet, which enables it to meet the high demands required for maritime and homeland security, law enforcement, marine safety, environmental protection and national defense missions. NSCs are 418 feet long with a top speed of 28 knots, a range of 12,000 miles, an endurance of 60 days and a crew of 120.