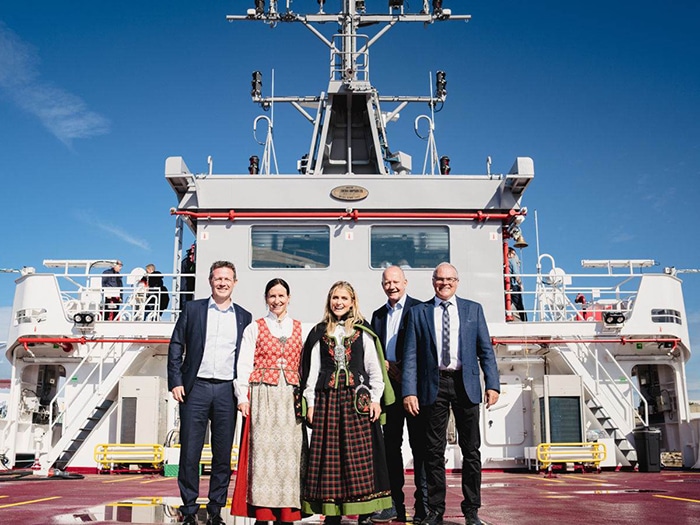 Norway’s ASKO Maritime is moving right along with its plans to put emissions-free — and ultimately people-free — autonomous freight ferries into operation across Oslo Fjord. The first two of the battery-electric vessels, which ASKO calls sea drones, were christened in a ceremony held in the harbor at Moss, Norway, on September 15, where they were named MS Marit and MS Therese by the former cross-country skiers and Olympic champions, Marit Bjørgen and Therese Johaug.

The sea drone freight ferries are designed to sail completely unmanned and will contribute to lower transportation costs, replacing one million road kilometers of truck transport a year (which corresponds to approximately 16,600 driver hours annually) and saving 5,000 tonnes of CO2 emissions per year.

The 67 meter long vessels were built at India’s Cochin Shipyard Limited (CSL) with the help of about $12.8 million in Norwegian Government funding as part of a project to provide emissions-free transportation of goods across the Oslo Fjord

The sea drones will operate between Moss and Horten and will mainly carry groceries for ASKO parent NorgesGruppen’s chains.

Initially, they ships will sail with a limited crew of around four people, including captains. After an extensive trial period of two years, the plan is to let them sail without people on board. Instead, they will be monitored from shore in Horten.

The sea drones started their journey from Cochin in India on June 28 this year when they were loaded on board the heavy lift vessel Yacht Servant, the largest semi-submersible vessel in the fleet of yacht transportation specialist DYT Superyacht Transport. Yacht Servant sailed up the east coast of India before crossing the Arabian Sea, it sailed through the Suez Canal, then crossed the Mediterranean and the Bay of Biscay before sailing through the English Channel bound for Horten.

The sea drones were floated off the Yacht Servant on August 10 and towed to Horten Industrial Park for the remaining work and tests to be carried out.