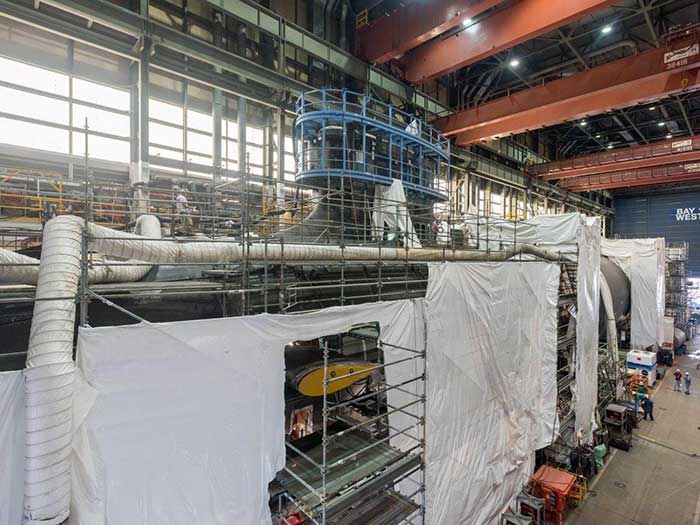 Indiana (SSN 789), the 16th Virginia-class submarine, has reached "pressure hull complete," signifying that all of its hull sections are joined to form a single, watertight unit

AUGUST 10, 2016 —  Huntington Ingalls Industries (NYSE:HII) reports that its Newport News Shipbuilding division has reached a major milestone in the construction of the Virginia Class submarine Indiana (SSN 789). It has reached “pressure hull complete,” signifying that all of its hull sections are joined to form a single, watertight unit.

Pressure hull complete is the last major milestone before the submarine’s christening. Construction began in September 2012 under a teaming agreement between Newport News and General Dynamics Electric Boat.

The submarine is about 82 percent complete and is scheduled for delivery to the Navy in the third quarter of 2017.

Ship’s Sponsor Diane Donald, wife of Adm. Kirk Donald (U.S. Navy, Ret.), and Ray Shearer, chairman of Indiana’s commissioning committee, visited the shipyard to see the progress being made on the submarine and meet with its crew.

“Witnessing Indiana come to life is one of the most gratifying experiences of my life,” Mrs. Donald said. “The countless hours of hard work the shipbuilders have put into constructing and perfecting this boat is apparent, as Indiana has now taken on the shape of a submarine. I also had the pleasure of spending time with the ship’s crew. As the wife of a submariner, it’s been a real honor getting to know a new generation of sailors and witnessing their enthusiasm and dedicated service to our nation. As Indiana moves closer to joining the Navy’s fleet next year, I look forward to continuing to share this journey with her shipbuilders and crew members.”

“We are on track to meet our budget and schedule commitments to the Navy, and I’m proud of the progress that the Newport News Shipbuilding-General Dynamics Electric Boat team is making,” said Jim Hughes, Newport News’ vice president, submarines and fleet support. “Our progress demonstrates the efficiency of the Navy’s two-per-year build build plan, which helps ensure America’s undersea superiority.”

Cmdr. Jesse J. Zimbauer, Indiana’s commanding officer, said, “Newport News Shipbuilding has completed the pressure hull on time for the Indiana, continuing the momentum of the Navy’s most successful build program and moving us another step closer to taking our submarine to sea.”