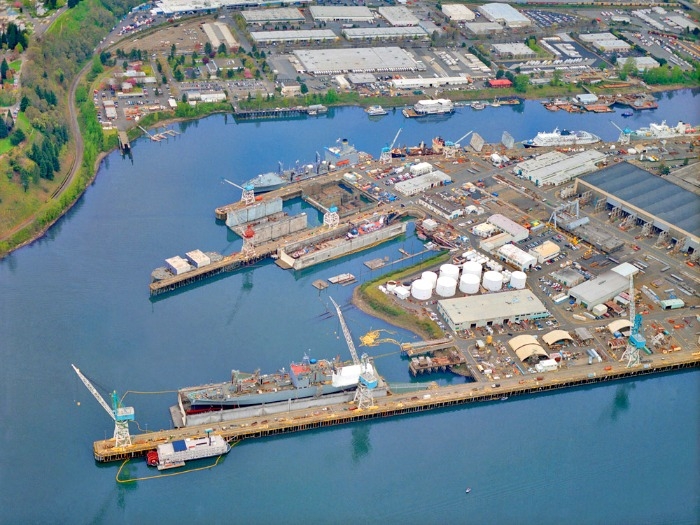 Aerial view of Vigor's Portland facility, where the Vigorous will go into service

NOVEMBER 1, 2014—Over a thousand attendees were on hand at Vigor Industrial’s Portland, OR, shipyard for the christening of Vigorous, the largest floating drydock in North America.

The 24,000-long ton Vigorous has a length of 960 feet, width between wingwalls of 186 feet, height of 70 feet. With an 80,000-ton lifting capacity, the Vigorous will be able to accommodate post-Panamax size ships, cruise ships, and government and military vessels. The drydock was transported from China in three sections by a Dockwise heavy lift vessel.

The first “customers” will be two U.S. Maritime Administration (MarAd) cargo ships, creating 130 jobs for Vigor workers. The company, which invested over $50 million to build the drydock in China and has a cruise ship booked for repairs in March 2015.

“This is a momentous day for us,” says Dave Whitcomb, Vigor COO, during his speech at the christening. “Vigorous is here to support family-wage jobs for the men and women of Vigor as well as the marine community here in Portland.”

The event also drew dignitaries such as Mayor Charlie Hales, who has advocated the key importance of industrial jobs. “Portlanders sometimes forget that there is a strong industrial sector in our economy,” Hales said according to an August press release on his website.

CEO Frank Foti told those gathered at the christening that the choice to sell the original drydock in 2001 was a difficult decision. Now, 13 years later he is proud to welcome the Vigorous, which joins 11 other drydocks at locations across the Pacific Northwest from Portland to Ketchikan.