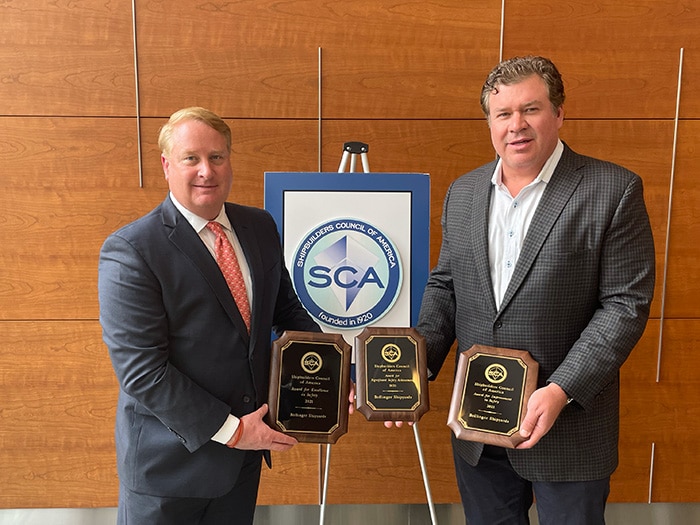 Among shipyards receiving multiple awards was Bollinger Shipyards, which has been the recipient of the prestigious award for Excellence in Safety for 17 consecutive years – an unprecedented streak in the shipbuilding industry. Bollinger also earned the Sawards for Significant Safety Achievement and Improvement in Safety. Seen here Bollinger president and CEO Ben Bordelon (right) accepts the awards from Shipbuilders Council of America president Matthew Paxton.

Shipbuilders Council of America (SCA), the national association representing the U.S. shipyard industry, today announced the recipients of its 2022 Annual Shipyard Safety Awards. SCA member companies are eligible for a Safety Award if they submit the SCA Injury & Illness survey for all four quarters, have zero fatalities throughout the year and either have a total recordable incident rate (TRIR) below the SCA average or if they reduce their year-on-year TRIR by 10 percent or more.

In this latest round of awards, SCA recognized a total of 15 U.S. shipyards and repair facilities with seven recipients receiving multiple awards.

SCA honors shipbuilding and repair organizations with the “Excellence in Safety” Award and “Improvement in Safety” Award each year for enhancement of operations and promotion of safety and accident prevention. The “Significance in Safety Achievement” Award is dedicated to shipyards that have had no fatalities and a total recordable incident rate (TRIR) under 1.0.

Over the past several years, the industry has seen the total recordable incident rate steadily decline. Safety professionals in the industry are continuing to implement new safety policies. The culture of safety and putting employees at the forefront of its focus has meant the industry has been able to adapt to various challenges that arose in 2021 while protecting all involved and keeping regular operations up to speed.

“American shipyards are dedicated to not only achieving the highest safety standards of any heavy manufacturing industry but are also leading in advancing safety practices,” said SCA president Matthew Paxton. “We salute each of the 15 shipyards and repair facilities being recognized this year for their continuous dedication to the health and safety of this critical workforce.”

The following shipyards and repair facilities were recognized for their safety practices this year:

Receiving the “Excellence in Safety” Award:

Receiving the “Improvement in Safety” Award: