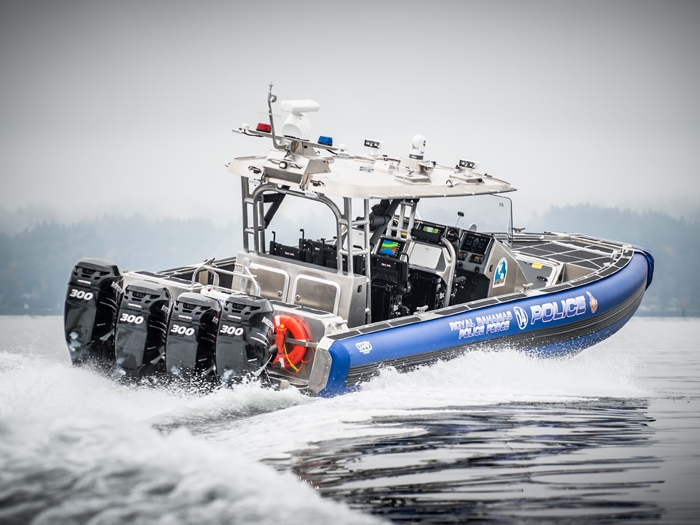 The 41′ Center Console – Offshore Interceptor Vessel’s primary mission is counter-narcotics and human trafficking interdiction within the waters of the Bahamas — an archipelago of over 700 Islands and Cays, strewn over 100,000 (258,998 square-kilometer) square miles of ocean.

The vessels were delivered late in December and acquired through a joint effort between the U.S. Bureau of International Narcotics and Law Enforcement Affairs (INL) and the Royal Bahamas Police Force.

The design is an integrated, offshore, mission specific vessel that can achieve pursuit speeds well in excess of 50 knots in the most extreme rough water conditions.

It features SAFE Boats patented hull and collar designs and SHOXS Seats, well known for their shock mitigation capabilities. The seats are designed to dramatically reduce the debilitating physical impact of extended, high speed, rough water operations on the crew. The ergonomic helm seat design has throttle controls integrated to the seat allowing the coxswain and the controls to be in full shock mitigation while operating at high speeds.
The boats are outfitted with a Garmin navigation suite, multiple radios and a FLIR M-Series thermal imaging camera which integrates into three multifunction display screens conveniently located for the entire crew to view and operate in low light conditions.
The vessels are powered by four Mercury 300hp Verado engines which have proven to be extremely efficient and reliable, allowing for a range that exceeds 400 nautical miles.
John Hotz, Director of Sales for Latin America and the Caribbean, SAFE Boats, says that the
Royal Bahamas Police Force has been a long-time customer and currently has four SAFE 41′ Center Console – Offshore vessels in service.
“We have worked very close with the Royal Bahamas Marine Support Services Branch to develop a boat with mission specific equipment that significantly advances their patrol and interdiction capabilities while keeping their crew safe under the most extreme conditions,” says Mr. Hotz. “The Royal Bahamas Police commonly operate in dangerous conditions and very remote areas. If not for their extremely professional boat crews and superior equipment they would not be nearly as effective as they are now.