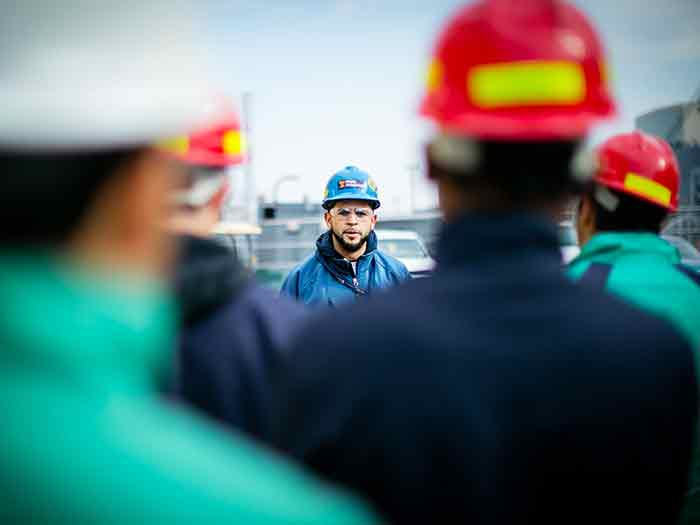 Supervisor Alfredo Dajer, graduate of the Philly Shipyard Apprentice Program, speaks to a group of students about career development opportunities from apprenticeship programs

The company opened the academy in May 2016 to provide a dedicated facility offering customized training for all production personnel. The visiting students shadowed current apprentices in the new academy, met with former apprentices, and then participated in a tour of the larger shipyard facility.

“Philly Shipyard’s apprentice program is a necessity for our business to build and sustain a long-term workforce,” said Jim Clark, the Training Manager, who organized the second annual event. “Since its inception, the company has graduated 106 apprentices who have developed into the next generation of skilled shipbuilders. There are another 75 active apprentices. The students visiting today have an opportunity to witness first-hand the value of joining an apprenticeship program to learn the skills and academics necessary for a successful career in manufacturing. It is an opportunity like no other.”

Initiated in 2004, the three-year apprenticeship program develops the next generation of Philly Shipyard employees.

As of today, shipyard apprentice graduates and current apprentices make up 23% of its current workforce. Since its founding, 21 graduates have moved into management positions and many have obtained additional manufacturing qualifications. The shipyard hired 50 apprentices in 2016 and intends to hire more in 2017.

Philly Shipyard has a construction backlog through 2019. It is currently building four 50,000 dwt tankers for a subsidiary of Kinder Morgan, Inc. and two 3,600 TEU containerships for Matson Navigation Company, Inc.