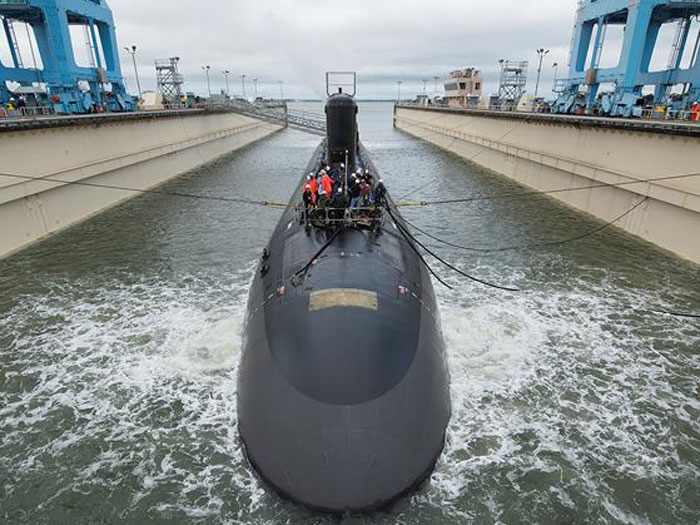 The 7,800-ton Virginia-class submarine John Warner (SSN 785) was moved with the help of three tugboats to Newport News Shipbuilding's submarine pier, where final outfitting, testing and crew certification will take place over the next six months

SEPTEMBER 18, 2014 — Huntington Ingalls Industries (NYSE:HII) has released a video showing the launch of the Virginia-class submarine John Warner (SSN 785) into the James River on Sept. 10 at the company’s Newport News Shipbuilding division.

The launch kicks off the final outfitting, testing and crew certification phase of construction prior to sea trials next year.

“The John Warner team has made tremendous progress over the last year,” said Jim Hughes, Newport News’ vice president of submarines and fleet support. “To see the submarine afloat in the James River just days after the christening is testament to the dedication and hard work of both the shipbuilders here at Newport News, as well those at our partner yard, Electric Boat.”

Once floating, the approximately 7,800-ton submarine was moved with the help of three tugboats to the shipyard’s submarine pier, where final outfitting, testing and crew certification will take place over the next six months.

“Having the submarine in the water allows us to test the remaining systems and improves the fidelity of the training that we are doing in preparation for crew certification,” said Cmdr. Dan Caldwell, the submarine’s prospective commanding officer. “The ship’s launching is an important milestone that puts us one step closer to our ultimate goal of taking this ship out to sea.”