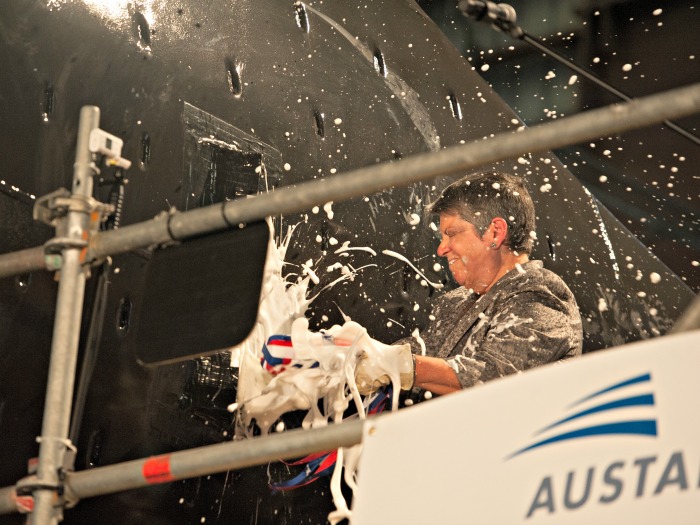 AUGUST 22, 2016—Austal recently celebrated the christening of the Expeditionary Fast Transport ship USNS Yuma (EPF 8) with a ceremony at its shipyard in Mobile, AL.

The ship’s sponsor, former Secretary of Homeland Security and Arizona Governor Janet Napolitano, headlined the group of Austal officials, naval guests, civic leaders, community members and Austal employees who attended the ceremony beneath the hull of the ship in Austal’s final assembly bay.

“As a former governor of Arizona, I am especially pleased to sponsor a ship that bears the name of a city whose history is synonymous with the arc of American history,” said Napolitano, who currently serves as the president of the University of California. “For generations, Native Americans flourished on the land that makes up present-day Yuma, and the Spanish explorers who made contact with them in the 16th century were among the first to arrive in what is now the United States. In later years, the trail that led thousands of people to California during the Gold Rush ran right down Yuma’s present-day Main Street.”

Yuma is the eighth of 10 Expeditionary Fast Transport vessels (EPF), formerly joint high speed vessels (JHSV), that Austal has under contract with the U.S. Navy as part of a $1.6 billion block-buy contract.

“On behalf of Austal USA’s shipbuilding team, we are proud to provide our Navy with an incredible vessel that will honor the great city of Yuma as she supports humanitarian efforts around the world,” said Austal USA president Craig Perciavalle. “We are also honoured to be a part of such an amazing community that has provided Austal with many of our over 4,000 highly talented employees.”

Chosen by the SECNAV to infuse her spirit into the ship as the ship’s sponsor, Napolitano, is a distinguished public servant with a record of leading large, complex organizations at the federal and state levels. She is the 20th president of the University of California. From 2009 to 2013, Napolitano served as Secretary of Homeland Security; from 2003 to 2009, as Governor of Arizona; from 1998 to 2003, as Attorney General of Arizona; from 1993 to 1997, as U.S. Attorney for the District of Arizona. Prior to that, she practiced at the law firm of Lewis & Roca in Phoenix, where she became a partner in 1989. She began her career in 1983 as a clerk for Judge Mary M. Schroeder of the U.S. Court of Appeals for the Ninth Circuit.

“Secretary Napolitano’s government service background, including her term in office as the Secretary of Homeland Security, make her well-qualified to serve as sponsor of this amazing vessel,” said Perciavalle

EPF 8, a 338-foot shallow draft aluminum catamaran, is a multi-mission, non-combatant transport vessel characterized by its high volume, high speed, and flexibility. It is the fourth U.S. Navy ship to be named Yuma as a tribute to the residents of the Arizona city and their close ties with the military.

When Secretary of the Navy Ray Mabus officially named EPF 8 “USNS Yuma” in April 2014 he stated, “The real reason we’re here today is the people of Yuma. For 86 years you have been supporting military aviation here in the heart of Arizona, and for 55 years you have been the desert home of Marine Corps aviation.” Mabus went on to say, “The ships we build today will be a part of fleet for more than three decades. Sailors not yet born will serve in her. With her ability to operate in areas that might be otherwise inaccessible, USNS Yuma may well be the only part of America, and her Sailors the only Americans, some people in the world will ever see.”

Yuma will ultimately join her sister EPF’s that have been delivered over the last three years, including USNS Spearhead (T-EPF 1), which has logged over 100,000 nautical miles at sea and is currently on her fifth deployment since she was delivered in 2012.