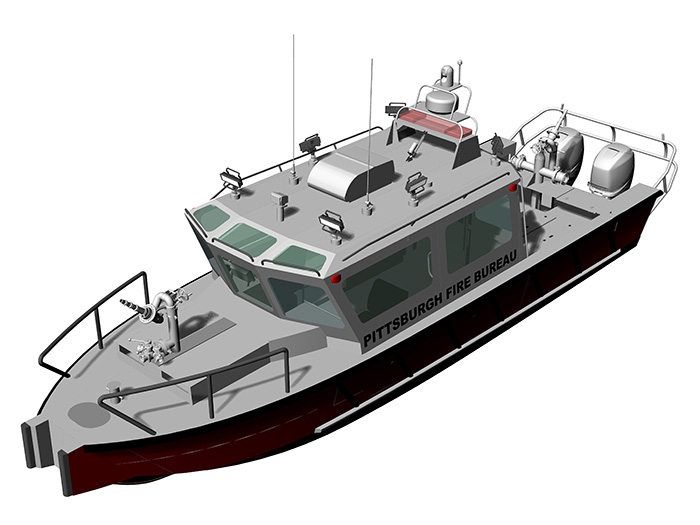 Now Superior, WI, based Lake Assault Boats has beaten out two other competitors and has been chosen to construct a 34-foot fireboat for the Pittsburgh Bureau of Fire

The fireboat will respond to emergencies and help manage fires on waterways, waterfronts, rail lines, and marinas that lie along the Allegheny and Monongahela Rivers, which join together in Pittsburgh to form the Ohio River.

“We are thrilled to be appointed by the City of Pittsburgh and its Equipment Leasing Authority to engineer and construct this extremely powerful fireboat to protect resources that lie along the city’s iconic riverfront areas,” said Chad DuMars, Lake Assault Boats vice president of operations. “Our team is especially excited to manufacture the first fireboat in its class capable of pumping up to 3,000 gallons of water per minute.”

“Pittsburgh hasn’t had a fireboat in service in more than forty years,” said Mr. DuMars, “and this purchase reflects a major commitment by the city to better protect vital resources that simply can’t be reached by traditional firefighting apparatus.”

The 34-foot fireboat is a deep V-hull configuration, with an 11-foot overall beam. The boat will be powered by twin Yamaha F300 4.2L V-6 outboard motors, capable of a top speed greater than 40 mph.

The firefighting system features a compact Hale 80FC pump flowing up to 3,000 gpm which is powered by a dedicated 6.6L Duramax V-8 diesel engine. The fire pump includes a 6-inch main discharge that feeds a number of outlets, including bow and stern mounted TFT Hurricane monitors, each capable of flowing 1,250 gpm.

Lake Assault Boats is a subsidiary of Capstan Corporation, which is also the parent company of Fraser Shipyards